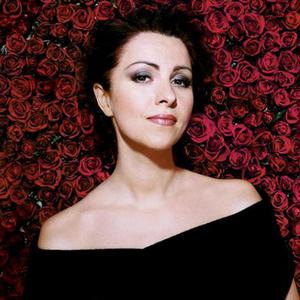 Angela Gheorghiu (born September 7, 1965) is a Romanian opera singer and one of the most famous and internationally acclaimed contemporary sopranos. A fiery and intense stage actress, Gheorghiu has a particular affinity for the operas of Verdi and Puccini, as well as the verismo school. On the other hand, having an impeccable musicianship and a gorgeous voice, she is also considered a great interpreter of French roles. She also performs and records the music of her native Romania, whether operatic, lieder, popular or Orthodox church music.[1]

The daughter of a train driver, Gheorghiu was born as Angela Burlacu in Adjud, Romania. Along with her sister Elena, she sang opera music from a very early age. At age 13, Gheorghiu went to study singing at the Bucharest Music Academy, primarily under Mia Barbu. Her graduation in 1989 coincided with the overthrow of Nicolae Ceau?escu, enabling her to seek out an international career immediately. Her professional debut took place at the Cluj Opera as Mim? (La boh?me) in 1990.

Gheorghiu made her international debut in 1992 at Covent Garden as Zerlina in Don Giovanni. She was offered Mim? in La boh?me, an important and difficult role, but she declined, preferring something less ambitious. Nevertheless, she made an excellent impression and went on to debut at the Vienna State Opera as Adina in L'elisir d'amore and at the Metropolitan Opera as Mimi in La boh?me.

In 1994, she was auditioned by the great conductor Sir Georg Solti for a new production of La traviata. When he heard her, he said: "I was in tears. I had to go out. The girl is wonderful. She can do anything!". Really, her debut as Violetta led her to international stardom.

Proud to be a diva in the old style, Angela Gheorghiu is also a modern opera star. She records many albums and complete recordings and often appears at the TV or in concerts for hundreds of people. Even her first great success, the La traviata with Solti, was watched by more than 1 million of people in the United Kingdom.

Gheorghiu builds her career slowly and carefully. She concentrates her repertoire in some roles with which she has great affinity: Violetta (La traviata), Mim? (La boh?me), Magda (La rondine), Adina (L'elisir d'amore), Juliette (Rom?o et Juliette) and some others. In 2003, she debuted as Nedda in Pagliacci and as Marguerite in Faust, which seems to be one of her most frequent roles nowadays. A lyric dramatic soprano with a large range and a dark coloured voice, Gheorghiu is also able to sing spinto roles. She has recorded Tosca (of which there's also a film directed by the French Beno?t Jacquot) and Leonora in Il trovatore for EMI and sang in her first Tosca at the Royal Opera House, Covent Garden, in 2006. Her performance was an overall success, although because the famous Zeffirelli production of 1964 was replaced by a new production (which premiered with her), there was perhaps too much comparison between the Toscas of Gheorghiu and Maria Callas, whom the Zeffirelli production was designed for.

Divorced from her first husband, from whom she retained her surname, Angela Gheorghiu married the French tenor Roberto Alagna in 1996. The couple have sung together often on stage and on studio recordings. She is also famous for her beauty and was recently chosen the 74th most beautiful woman in the world by the magazine FHM. But, above all, the Romanian soprano is noted for her creamy and flexible voice, her rare musicianship and the deep and intense portrayals of her characters.