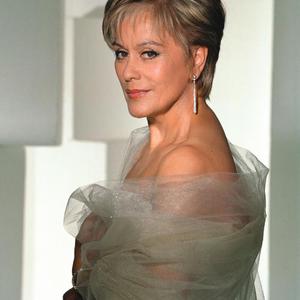 Dame Kiri Janette Te Kanawa, ONZ, AC, DBE, (IPA: /?ki?ri ?te? ?k??n?w?/, born March 6, 1944) is one of the world's most celebrated sopranos. In 1981, she was seen and heard around the world by an estimated 600 million people when she sang H?ndel's "Let the Bright Seraphim" at the wedding of Charles, Prince of Wales and Lady Diana Spencer. Te Kanawa was born in Gisborne, on New Zealand's North Island.

Te Kanawa was born in Gisborne, on New Zealand's North Island. She has both M?ori and European ancestry, but little is known about her birth parents as she was adopted as an infant. She is the adopted daughter of an Irish mother and M?ori father. In her teens and early 20s, Te Kanawa was a pop star and popular entertainer at clubs in New Zealand.

She was educated at Saint Mary's College Auckland and formally trained in operatic singing by the celebrated Dame Sister Mary Leo, RSM, who was New Zealand's best-known opera coach. She began her singing career as a mezzo-soprano, but later developed into a soprano. Her recording of the "Nuns' Chorus" from the Strauss operetta Casanova was New Zealand's first gold record.

Kiri married Desmond Park, whom she met on a blind date in Auckland in August 1967 and married 6 months later. The couple adopted two children, Antonia (1976) and Thomas (1979, named after Kiri's adoptive father). The couple divorced in the late 1990s.

Career
In 1965 she won the prestigious Mobil Song Quest, entered by all types of singers, jazz, pop and classical, with her performance of Puccini's "Vissi d'arte" from Tosca. As the winner, she received a grant to study in London.

Early years in London
In 1966, without an audition, she enrolled at the London Opera Centre to study under James Robertson, who is said to have stated that Te Kanawa did not have any singing technique when she arrived at the school but did have a gift for captivating audiences.

She first appeared on stage as the "Second Lady" in Die Zauberfl?te, as well as in performances of Dido and Aeneas in December 1968 at the Sadler's Wells Theatre. In 1969, she sang "Elena" in Gioacchino Rossini's La donna del lago at the Camden Festival. Praise for her "Idamante" in Mozart's Idomeneo led to an offer of a three-year contract as junior principal at the Royal Opera House Covent Garden where she made her debut as 'Xenia' in Boris Godunov and a 'Flower Maiden' in Parsifal in 1970, and was also heard as the "Voice from Heaven", an off-stage role, at the end of Verdi's Don Carlo. Also, during 1969, she was offered the role of the Countess in The Marriage of Figaro after an audition in which the conductor, Colin Davis said "I couldn't believe my ears. I've taken thousands of auditions, but it was such a fantastically beautiful voice." Under director John Copley, Te Kanawa was carefully groomed for the role for a December 1971 opening.

International career
Meanwhile, word of her success had reached John Crosby at the Santa Fe Opera, a summer opera festival in the U.S. state of New Mexico then about to begin its fifteenth season. He cast her in the role of the Countess in Figaro, which opened on 30 July 1971. "It was two of the newcomers who left the audience dazzled: Frederica von Stade as Cherubino and Kiri Te Kanawa as the Countess. Everyone knew at once that these were brilliant finds. History has confirmed that first impression." Von Stade and Te Kanawa have continued this association even up to the present day. In 2007, they sang together at Kiri's farewell concert in Carnegie Hall.

But on 1 December 1971 at Covent Garden, Kiri Te Kanawa repeated the Santa Fe triumph and created an international sensation in the same role: "with 'Porgi amor' Kiri knocked the place flat." It was followed by performances as the Countess at the San Francisco Opera in autumn 1972, while her Metropolitan Opera debut in 1974 as Desdemona in Otello took place on short notice, replacing an ill Teresa Stratas at the last minute.

Te Kanawa has a particular affinity for the heroines of Richard Strauss. Her first appearance in the title role in Arabella was at the Houston Grand Opera in 1977, followed by the roles of the Marschallin in Der Rosenkavalier and the Countess in Capriccio. Many performances were given under the baton of Georg Solti and it was with him that she made her first recording of Figaro.

Te Kanawa retired from the opera stage after her performances in Samuel Barber's Vanessa with the Washington National Opera and the Los Angeles Opera in November/December 2004, but she still performs in concert halls.

UK talk show host Michael Parkinson asked her to name the person she felt was the greatest singer that ever lived. She replied: "The young Elvis Presley, without any doubt."

Honours
Kiri Te Kanawa was conferred a Dame Commander of The Order of the British Empire (DBE) in 1982, invested as an Honorary Companion of the Order of Australia (AC) in 1990 and awarded the prestigious Order of New Zealand (ONZ) in the 1995 Queen's Birthday Honours List. She has also received honorary degrees from the following universities in the UK: Cambridge, Dundee, Durham, Nottingham, Oxford, Sunderland, Warwick as well as these universities worldwide: Chicago, Auckland and Waikato as well as being honorary fellow of Somerville College, Oxford and Wolfson College, Cambridge. She is also patron of Ringmer Community College, a school in the South-East of England.

Controversy
Te Kanawa has always been popular among New Zealanders, but in a 2003 interview with the Melbourne-based Herald Sun she was critical of the high rate of welfare dependence among the M?ori people, angering some of her compatriots.

Te Kanawa has recently been taken to court by Leading Edge for cancelling a concert with Australian singer John Farnham after learning that his fans sometimes threw their underwear on stage, which he would then proudly display. She won this breach-of-contract lawsuit, in part because no binding contract was made, but over $100,000 in court costs were awarded against the Mittane holding company which employs and manages Te Kanawa.

The Foundation manages a trust fund to provide financial and career scholarships to young New Zealand singers and musicians.