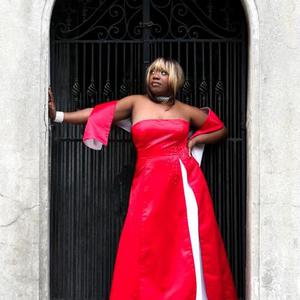 ?SHANG? a native Washingtonian heralded by fans and critics alike as the vocal 8th wonder of the world. Shang's humble beginnings started much the same as her peers in the powerful world of gospel music through traditional singing in the church choir. Shang's vocal gift began in the late 1940's with her grandmother Louvenia Carroll who was a member of the Legendary Clara Ward Singers. Throughout the years, Shang and her family have laid a tremendous mark on the gospel world, spreading the gospel up and down the east coast.

At an early age, Shang decided to branch out into other aspects of music. This continued into her late teens and early twenties where she molded herself into a well rounded and diverse vocalist in all aspects of music. Several artists and management agencies began to notice her as a young vocalist with an excellent natural ear for music. Before long she began receiving requests to sing background and fill in spots for various artists in the local area. She was quickly picked up by international recording artist, Nathan Heathman of Washington DC, who had been the musical director of the Great Phyllis Hyman until her untimely departure. Shang's accomplishments can only be expressed by naming some of the great venues at which she has performed; the Legendary Blues Alley in Washington DC, DAR Constitution Hall in Washington DC, Hampton Jazz Festival in Hampton Va., Madison Square Gardens in New York, Aretha Franklin's Birthday Celebration along with? Mr. Personality? himself Lloyd Price. Bohemian Caverns in Washington DC, St. Lucia Festival, Sands Hotel in Atlantic City, Star Plaza in Indianapolis, Indiana, Zanzibar Blue w/ Nathan Heathman in Philadelphia, Pa., Civic Center in Florence, SC, Rock and Roll Hall of Fame, Potawatomi Casino in Milwaukee, and many more.

Another way to know the greatness of Shang's talent is to mention some of the people she has worked closely with and received praise from; The Legendary Jean Carne, Phil Perry, Norman Connors, Jennifer Holiday, Meli'sa Morgan, Jerry Butler, Ben E. King, Gene Chandler, Lloyd Price, Chaka Khan, Yolanda Adams, Marcus Johnson, Al Johnson, Ollie Woodson (of the Temptations), Nancy Wilson, the Late Great Nathan Heathman, Maurice Chevalier Davis and Mike Gamble (her producers) and many, many others.

Shang's quiet strength and elegance can be heard in her words, ?To be a gifted artist does not solely rely on your ability to sing, but also relies on your spirituality, your love for the music, passion, personality and always keeping God First in everything you do.?