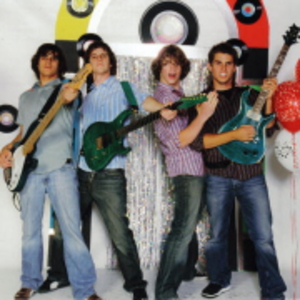 1) Say No More was a female fronted melodic rock/heavy metal band from the Netherlands.
They released their debut "Caught In The Rain" in 1993.

It's hard for Peter Pedrazzi to stay in his seat when talking about SAY NO MORE. It's not ADHD. It's just that the 22-year old lead singer/songwriter has boundless enthusiasm for his band and the new CD. "I write about common themes in an uncommon way," says Pedrazzi. "We use a lot of candor. That comes from being together so long."

Produced by Kris Anaya (of Drive-Thru's An Angle), What You Thought You Knew chronicles SAY NO MORE's disorienting sojourn from their hometown of Salinas to Los Angeles. As a fellow Salinas native, Anaya easily grasped the band's sense of culture shock, and helped them channel it to great effect. The music rocks, and rocks hard, but there's no denying a core innocence to this band, born of a life spent in the pastures of plenty up in Monterey County. "I was raised on a farm, riding horses," notes Pedrazzi. "Then you go to the city and dye your hair."

The album kicks off with "Masquerade," a backbreaking rocker that contrasts the make-believe of on-stage performance with wispy memories of home. Which one is the true mirage? No time to answer as SAY NO MORE quickly segues to "This is Our Way," a declarative double-time track about staying true to small town virtues. "Long Drive Home" picks up on that theme, showcasing SNM's knack for rich harmonies and layered guitar parts.

Though young, the members of SAY NO MORE are no strangers to tragedy, as the song "For Drew" proves. A requiem for a friend who lost her life in a car wreck, the song veers from a linear narrative to a strikingly personal invocation ("The wind turns some of us to smoke/Be prepared to give your life away"). "Lyrically I wanted to come from a different place," says Pedrazzi. "When it comes to death, you never know how to start the conversation."

Fast forward to present day in "Honestly,? a crushing portrait of a dissolute city life. That preoccupation with honesty comes up again in the upbeat title track and the surprisingly sweet ballad "Tell Me What You're Thinking Baby." Of the latter's straight-up acoustic arrangement, Pedrazzi says, "If I wrote a record by myself it would sound like a Bob Dylan record. When people try to write too much themselves it doesn't work. My band mates are the real talents." After another longing look homeward in "Loan Oak Corral," SAY NO MORE ends the CD on a cynical note with "The Genius," a song about a relationship collapsing under the weight of its own lies.

SAY NO MORE's instinct for truth-telling stems from their long history together. The band first formed before any of the members was old enough to drive, and the line-up has been intact for years. Pedrazzi grew up on a Salinas farm that has been in his family since the 1800's. "It's the major discrepancy in my life," he says of his cattle ranching forefathers. "I was supposed to take over, as the only son. But it's not going to happen."

The four small town kids taught themselves how to rock in the holiest of rock temples: their parents' garages. Says drummer Tim Spier, "We've been playing a long time, and we can almost predict what the others will do. We always said we're a family first. The hardest thing about doing a band is finding people to do it with. You have to like them as people and have similar taste."

Good thing they do, as all four moved together to L.A.'s San Fernando Valley two years ago to try to break into the business. Bu then they had recorded their debut indie CD, Stranger in Dreams. Last year they scraped enough money to cut a second CD, The Transition. But the band's big break came when they entered and won a battle of the bands contest sponsored by MTV U, "Best Music on Campus" at California State University, Northridge. First prize: a contract with Drive-Thru Records.

That's when the hard work began, with the band members struggling to perfect their original voice. "We wanted to have a great hi-fi sounding record," recalls drummer Spier, "but we didn't want super-produced bells and whistles. We put a lot of thought into everything."

With the new CD done, all four are eager to load up their puke-green colored 1973 Tioga van (nickname: Gumby) and head out on the road. They're confident they can win over audiences around the country just as they did in L.A. Says Pedrazzi, "We're big dreamers. These days I find it hard to sleep, because we're so fortunate. I don't need to go to sleep to dream. I just drink coffee all day."

And what happens when What You Thought You Knew catches fire? Considering how content they are living together in their dirt bag Sherman Oaks apartment, there's no gauging their potential for future excitement. "I'm 23 in a rock band," says Pedrazzi. "It's the coolest thing ever. We love every minute of this shitty lifestyle."

What You Thought You Knew