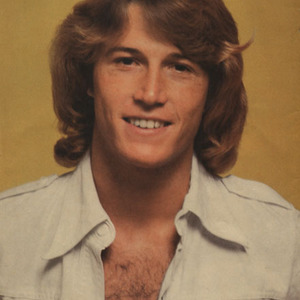 Aussies Down Under, Family Act, Pop, The British Are Coming

Andrew Roy Gibb (March 5, 1958 ? March 10, 1988) was an English-born Australian singer and teen idol, and the younger brother of Barry, Robin and Maurice Gibb, also known as the Bee Gees. The Early Years He was born Andrew Roy Gibb in Manchester, England, to Hugh and Barbara Gibb. His family immigrated to Australia within months of his birth, settling in Redcliffe, Queensland, near Brisbane. Gibb began playing at tourist clubs around Spain's coastal Island of Ibiza, and later back in his homeland of Britain on the Isle of Man, as a young teenager.

The Early Years
He was born Andrew Roy Gibb in Manchester, England, to Hugh and Barbara Gibb. His family immigrated to Australia within months of his birth, settling in Redcliffe, Queensland, near Brisbane.

Gibb began playing at tourist clubs around Spain's coastal Island of Ibiza, and later back in his homeland of Britain on the Isle of Man, as a young teenager. The idea of his joining the Bee Gees was often suggested, but the age gap between him and his elder brothers (more than 11 years younger than Barry, slightly more than eight years younger than twins Robin and Maurice) made this difficult to achieve.

After returning to Australia in 1975 to hone his craft as a singer and songwriter, Gibb began recording a series of his own compositions, one of which was released as a single on the ATA label, owned by veteran Australian performer, Col Joye. "Words and Music" would eventually reach Top Five on the Sydney music charts in 1976. This breakout would pave the way to an even greater milestone later that year ? an invitation from Robert Stigwood (who, at the time, was also the Bee Gees' manager) to launch his international career signed to his label, RSO Records. Gibb soon moved to Miami Beach, Florida to begin working on songs with his brother Barry, and co-producers Albhy Galuten and Karl Richardson.

Prior to leaving Australia, Gibb had married his girlfriend, Kim Reeder. They had one child, a daughter named Peta. Their marriage ended in 1978, his work and family commitments having come between them. Notwithstanding, Gibb's personal trials were soon overshadowed by fame and recognition.

Rise to the Top
In the United States, Gibb became the first male solo artist to chart three consecutive Number One singles on the Billboard Hot 100. In July of 1977, he had his first major hit, "I Just Want to Be Your Everything", a song written by his brother Barry, just as his first album Flowing Rivers broke into the US Top 20, on its way to selling over a million copies. The album's second single "(Love Is) Thicker Than Water" broke in early 1978 amidst the commercial explosion caused by his brothers' contributions to the Saturday Night Fever soundtrack, replacing "Stayin' Alive" at the top of the US charts, and then surpassed by "Night Fever" when it reached the summit in mid-March.

Continuing the momentum of his first successes, Gibb began work with the Gibb-Galuten-Richardson production team on his second album Shadow Dancing. The title track, written by all four Gibb brothers, was released as a single in the US in April 1978, and in mid-June began a seven week run at Number One, achieving platinum status. Two further Top Ten singles, "An Everlasting Love" and "(Our Love) Don't Throw It All Away", a cover of the earlier version by his brothers, were extracted from the album, which became another million seller.

Despite his impressive accomplishments, the pressures and excesses of such rapid success began to consume Gibb, and eventually he would succumb to drug addiction and the reality of a career in decline. In 1979, Gibb performed, along with the Bee Gees, ABBA, and Olivia Newton-John (duet with "Rest Your Love On Me"), at the Music for UNICEF Concert at the United Nations General Assembly, broadcast worldwide.

He returned to the studio to begin recording sessions for his final full studio album, After Dark. With drugs impeding his previous ability to write and even fully sing the tracks on his own record, Gibb was only able to forge his performance with nearly intrusive support from brother Barry.[citation needed] In March of 1980 the last of Gibb's Top Ten singles charted just ahead of the album's release. "Desire", was recorded for the Bee Gees' 1979 album Spirits Having Flown, and featured their original track with Gibb's lead vocal dubbed in. A second single, "I Can't Help It", a duet with family friend Olivia Newton-John, which they had performed at the UN, reached the Top Twenty; they donated the royalties to UNICEF.

Later in the year, Andy Gibb's Greatest Hits was released as a finale to his contract with RSO Records, with two new songs: "Time Is Time" (number 15 in January 1981) and "Me (Without You)" (Gibb's last Top Forty chart entry) shipped as singles.

Career Stall Out
A well-publicised affair with actress Victoria Principal ensued, while Gibb signed to several projects outside of the recording studio, including acclaimed performances in Andrew Lloyd Webber's Joseph and the Amazing Technicolor Dreamcoat on Broadway, Gilbert & Sullivan's The Pirates of Penzance in Los Angeles, and a short-term stint as co-host of the television music show Solid Gold.

However, as Gibb's drug use intensified, he was unable to commit to regular performances and tapings, and was eventually removed from each of these endeavours. His romance with Principal also ended a short time later, but not before recording and releasing a vanity duet of the Everly Brothers' classic "All I Have To Do Is Dream". This would be Gibb's last official single, and his last US chart entry, peaking at number 51.

His family convinced him to seek treatment for his drug addiction; after a stint at the Betty Ford Clinic in the mid-1980s, Gibb toured small venues with a stage show of his greatest hits and covers, and appeared in guest-starring roles on several television situation comedies. His performances showed him to have seemingly recovered from his addiction. But although his performances in his new lifestyle were well-received, they failed to return him to the height of his past successes. In 1987, with his debts far outweighing his income, Gibb was forced to declare bankruptcy.

Determined to revive his recording career, Gibb returned to work alongside brothers Barry and Maurice. They produced a series of demo recordings, which would eventually secure him a contract with the UK branch of Island Records. One of the demos, "Man On Fire", was released posthumously on the 1991 Polydor anthology, Andy Gibb, while another demo, "Arrow Through The Heart", though unreleased to the present day, would be featured on an episode of VH1's series Behind the Music.

Death
He travelled to England to fulfill the label's request for more songs, moving into brother Robin's estate in Thame, Oxfordshire. He turned to drinking heavily, and fell ill. On March 7, 1988, Andy was taken to the John Radcliffe Hospital in Oxford complaining of stomach pains.

Gibb died three days later of myocarditis ? a sudden inflammation of the heart muscle caused by a viral infection. While his years of alcohol and cocaine abuse did not directly result in his death, they did aggravate the condition.

His body was brought back to Los Angeles, California, for interment in Forest Lawn - Hollywood Hills Cemetery. Roughly a decade later, at their One Night Only concert, the Bee Gees performed "(Our Love) Don't Throw It All Away" in memory of Andy.