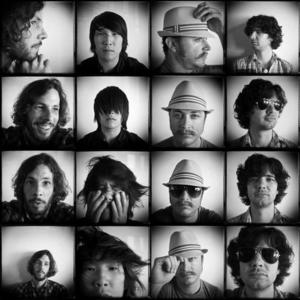 Rx Bandits is a four-member band based in Seal Beach, California, United States. Their musical style is an eclectic mix of progressive rock, ska, punk, and reggae deemed groove tech by the band. The band started out in 1995, amid other popular southern California ska-influenced acts such as Reel Big Fish and No Doubt. Of the original line-up, only singer/songwriter Matt Embree and drummer Chris Tsagakis remain.

The band started out in 1995, amid other popular southern California ska-influenced acts such as Reel Big Fish and No Doubt. Of the original line-up, only singer/songwriter Matt Embree and drummer Chris Tsagakis remain. Their first two releases were recorded with bassist James Salomone and trombonist Rich Balling. Upon signing to Drive-Thru Records, the band released the album Halfway Between Here and There, a straightforward third-wave ska effort, though lyrics in songs such as "Gun In Your Hand" hinted towards the political leanings which would be evident in their subsequent releases.

They are notable for their strong political views, which they share with fans through periodic website posts.

Their live shows are known for being highly energetic, with improvisational jams in between songs. They perform extended versions of many numbers; they fall somewhat short of being a full fledged "jam band," however it is fair to say that they exhibit musicianship live that is not captured by their recordings.

With 2001's Progress, the band took a huge step forward musically. The incarnation of the band which recorded the album consisted of Embree, Tsagaskis, Balling, Salomone, and current trombonist Chris Sheets. Steve Choi played keyboards on the album, but was not credited as a full member of the band, although he often joined the band on stage. With this album, the band moved beyond playing pure ska. Progress involved elements of punk, reggae, and hardcore punk. Indeed, the band itself notes influences ranging from Fugazi and Bad Brains, to Jimi Hendrix, Led Zeppelin, and Toots and the Maytals. The album spawned their only music video, for the song "Analog Boy".

Some time after the release of Progress, Steve Choi was made a full time member of the band, however both Rich Balling and James Salomone left the band. They gained saxophonist Steve Borth, who had played formerly in the popular East Bay ska-punk band Link 80. Bassist Joe Troy, a longtime friend of Embree, joined the band as well to complete their current line-up.

In 2003, they released The Resignation, a CD/DVD release. The album was recorded live, with the exception of vocals and some overdubs. Embree also shared songwriting duties with Steve Choi, whereas he had previously been responsible for all of the band's material. Also of note is the album cover, which was originally a painting by Aaron Nagel, a Bay Area artist and member of both Link 80 and Desa. Musically, the album continued the genre mixing of Progress and experimented with unconventional time signatures. It again featured overtly political lyrics, evident most obviously in songs such as "Overcome (The Recapitulation)," and "Mastering the List".

Since the release of The Resignation, several members have found time for side projects.
In July 2006 band member Steve Borth left the band to pursue his side project turned main focus, Satori. Embree is involved with his own independent label, MDB Records, as well as his own solo project Love You Moon also contributing to the hip hop group Seekret Socyetee, Coke vs. Bills with Joe Troy, pebaluna with Lauren Coleman, and Apotheke with members of the Rx Bandits. Steve Choi plays drums in Machinesand has collaborated with Asian Man Records founder Mike Park in both The Chinkees and The Bruce Lee Band. Embree and Tsagakis are two of the core members in The Sound of Animals Fighting. Tsagaskis is the creative force behind his ambient, electronic project called Technology.

On October 10th, 2006 they released the follow-up to The Resignation entitled "...And The Battle Begun"
through Sargent House / MDB Records. ...ATBB continued to show the changes that the Bandits were making to their sound, adding more elements of progressive rock and funk grooves. Sprawling compositions and virtuoso playing from all the members of the band won the band many new fans, and gained a spot on the Bonnaroo Music and Arts Festival.

On July 14th, 2009, they released their latest album, Mandala. The band showed tremendous musical growth since their early 3rd wave ska roots, and Mandala was a true musical force to be reckoned with. Prodigious drumming from Chirs Tsagakis and solid bass grooves from Joe Troy formed the backbone, while Steve Choi and Matt Embree dueled with noodley guitars and emphatic vocals from Embree. The Bandits had reached a progressive peak, showing that progressive instrumentation could still have soul and feeling, and that a few songs could change a room's demeanor.

In 2011, the band announced that their summer tour would be their last tour. Despite the belief that this meant the band was breaking up, Steve Choi released an announcement that they were not breaking up but would not be touring anymore:

"To clarify, we're not breaking up. We're just doing our last tour. What we're gonna do in the future, we're not quite sure. That's a big question because it involves what we're going to do collectively and what we're going to do individually. Despite popular belief, we don't live together, sleep together or eat together. Those days have passed. We all have our own lives to tend to. When we're not full time touring or playing shows, we gotta handle business?"

...And The Battle Begun

Halfway Between Here And There