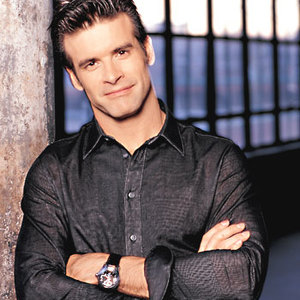 Joseph Armand Roch Voisine, O.C. (born 26 March 1963 in Edmundston, New Brunswick) is an Acadian-Qu?b?cois singer-songwriter, actor, and radio and TV host who lives in Montreal, Quebec, when he is not performing in Las Vegas, Nevada. He writes and performs material in both English and French. He won the Juno Award for Male Vocalist of the Year in 1994. In 1997 he was made an Officer of the Order of Canada.

Roch Voisine was born in Edmundston, New Brunswick, but grew up in Saint Basile. His parents are R?al Voisine, mayor of Notre-Dame-du-Lac, Qu?bec and a former English teacher, and Z?lande Robichaud, a former nurse.

Voisine's musical breakthrough came with his 1989 album H?l?ne which sold three million copies and became a major hit not only in Quebec but also in France, Belgium and Switzerland. In 1990, H?l?ne was awarded the Best Album prize at the the Victoires de la Musique, France's version of Grammys. After a highly successful European Tour in 1991, he was awarded France's Chevalier de l'Ordre des Arts et des Lettres.

In 1993, Voisine had his biggest English-language hit to date with the single and album both entitled I'll Always Be There, which he worked on with David Foster.

Over the years, he has continued to alternatively record both French and English-language albums. His French language work and concert tours have continued to enjoy success in Europe (especially France) and Quebec, while his English-language recordings are a frequent mainstay of Canadian Adult Contemporary radio.

I'll Always Be There (Deluxe Edition)