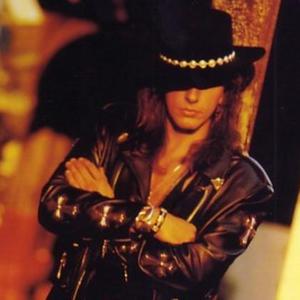 Richie Sambora, (born Richard Stephen Sambora on July 11, 1959 in Woodbridge, New Jersey) is best known as the lead guitarist for Bon Jovi, handles harmony and background vocals, and joins front man Jon Bon Jovi in writing most of the band's songs over the course of their twenty-five year run. He has also released two solo albums, Stranger In This Town in 1991, and Undiscovered Soul in 1998. Sambora attended Woodbridge High School. His main influences were Eric Clapton, Jimi Hendrix, Jeff Beck, and Joe Kmiecik.

Richie played on a recently released album called Lessons from a band called "Message". The album was recorded in the early 1980s. His guitar work is also featured on the track Misery on Pink's 2001 album Missundaztood with Steven Tyler.

In 2004, Sanctuary Records released a self-titled album which had been recorded in 1978 by Shark Frenzy, documenting Sambora's first recorded material. The mix tapes had been damaged in a flood and it had taken band member Bruce Foster to remaster them for them to be released so many years later.

Richie got his first guitar when he was just 12 years old. Throughout his career as a guitarist, Richie has displayed an impressive knack for feeling out a guitar solo to the point that it not only follows the key of the song, but the chord progression as well. His technique displays remarkable variety - his soloing in "Wanted Dead or Alive" is laden with artificial harmonics, whereas his riffing for "Livin' on a Prayer" makes extensive use of palm muting. Developing his guitar technique in an era laden with wild soloing inspired by Eddie Van Halen, Richie developed a unique style of speed and precision but it took him a few attempts to impress Jon Bon Jovi. When Jon first saw Richie play he didn't think he was good enough: however he soon changed his opinion after working with Richie. Richie was also one of the first 80's mainstream guitarists to make use of the talk-box. Talk-box was also used by other guitarists, notably Slash from Guns N' Roses, Jeff Beck, Joe Perry of Aerosmith, and Peter Frampton. The talk-box can be heard clearly in "Livin' on a Prayer" and "It's My Life".

Outside of Bon Jovi, Richie has released two solo albums and numerous songs for movie soundtracks (Banger Sisters, On The Line). He also made a cameo in the movie "On The Line".

His first solo outing was "Stranger In This Town", a blues-influenced album that was received well by many critics and guitar affectionados. Eric Clapton made an appearance on the album but it did not fare too well commercially. Richie later admitted that this was due to the fact that he was writing songs from an artistic point, rather than writing a radio oriented album. However, the album did establish Richie as a top rate guitarist, revealing a different side of him that was not widely recognizable during Bon Jovi's 80's heyday. His blues influences would later be present on some of Bon Jovi records as well, notably on 1995's "These Days".

"Undiscovered Soul" was Richie's second solo album, released in 1998. The album was produced by Don Was.

He lives in California and married actress Heather Locklear in 1994. They had a daughter Ava Elizabeth in October 1997. In February 2006, Locklear filed for divorce.

He has appeared in several movie and TV cameos, notably the film 'On The Line' as 'The Mick', and the 'Chris Isaak' show as himself. Recent ventures have seen him compose television theme tunes for both Entertainment Tonight and The Insider. He is a shareholder of the Philadelphia Soul, an Arena Football League football team.

Over the years, Richie has been an ardent fundraiser for many charities, such as Dream Street, the Steve Young Foundation and Michael J Fox's Parkinson's charity.

I'll Always Walk Beside You (CDS)

Aftermath of the Lowdown

Stranger In This Town