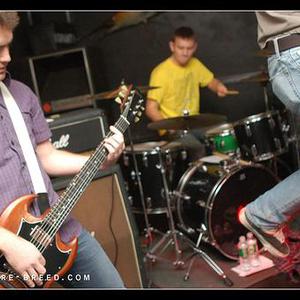 Several bands with the name Reunion. 1) A pop-punk/melodic hardcore band from Portland, Maine. They have a seven track EP out on Flightplan records. 2) Reunion are two well-known Swedish musicians - bassist & producer Jens Lod?n and jazz pianist Mathias Landaeus. They met in the mid 80s as teenagers and have been playing and producing music together since then. They started recording on a 4-track and many years later their first 12-inch "Ignition/Cargo" (SD1002) was released on Sonar Kollektiv.

1) A pop-punk/melodic hardcore band from Portland, Maine. They have a seven track EP out on Flightplan records.

2) Reunion are two well-known Swedish musicians - bassist & producer Jens Lod?n and jazz pianist Mathias Landaeus. They met in the mid 80s as teenagers and have been playing and producing music together since then. They started recording on a 4-track and many years later their first 12-inch "Ignition/Cargo" (SD1002) was released on Sonar Kollektiv.

Meanwhile, both have been independently involved in a variety of musical projects. Jens was nominated for a Swedish Grammy award for his nu-jazz remix album Holon (EMI) in 2001, and Mathias currently plays in the NBB (Sweden's leading radio big band) as well as in several other bands, including his own quartet with which he has released two albums on the Swedish label Amigo.

Nowadays when Jens and Mathias enter the studio, their unique mix of playfulness, dedication and curiosity is still there even after working together for so many years. That is why Reunion is still a part of their lives - and we are really happy about that! Having cultivated their own style for such a long time, this dynamic duo now has created an album of electronic music influenced by jazz, funk and pop, and marked by intelligent and hard swinging beats, soulful vocals and guest appearances by many of Sweden's leading jazz musicians.

The band was found in 1998 by Belfegor and Firebliss. They are brought together during their mutual work in Dark Inversion in the period of 1996-1998.

The desire to make something different gave birth to REUNION. Their first production was called "Infernal Kingdom" - a fine piece of symphonic black metal, which in 2002 was released in restricted circulation by Counter Attack. Their second album - "Stream of Hate" was finished in January 2004. "Stream of Hate" is a direct old-school black metal in the way of the Norwegian standards in that music. The real difference with the former album is the total absence of synths which were the leading instrument creating the atmosphere of "Infernal Kingdom". The musicians explain it with a kind of nostalgia to the "old times, when black metal was young". "Stream of Hate" impresses with direct music, ferocious singing and great guitars. In October 2004 Reunion signed with ShadowLand Music and in November the same year "Stream of Hate" was released.

Since the release of "Stream of Hate" Reunion have taken place in a couple of events: Metal Repulsive Blasphemy Festival (16 April 2005 in Sofia) and Decadence Festival (17 December 2005 in Varna). Additional musicians participated for Reunion in both occasions: Shurale (played bass at Metal Repulsive Blasphemy Festival), Pilota (guitars at both appearances) and Agarvaen (bass at Decadence Festival).

The band is currently working on its third album.

Reunion was a studio group created around songwriters Norman Dolph and Paul DiFranco, which scored one US Top 10 single in 1974 with the novelty song "Life Is A Rock (But The Radio Rolled Me)". The group had already released a number of singles on RCA Records with no luck when writer/producer DiFranco approached writer/singer Joey Levine to work on the song which ultimately became their only hit. The song had been written two years previously but had remained unfinished. Levine, Dolph and DiFranco took final writing credit and it was recorded in a bubblegum style (Levine had had success writing hit songs in the 60s for studio bubblegum outfits such as the Ohio Express, and was a member of the Third Rail). "Life Is A Rock (But The Radio Rolled Me)" reached number 8 in the US in late 1974 but further releases under the Reunion name failed to chart. They did not record any albums and the project was soon shelved.

The band was formed in 1998 and had the follow line-up Daniel Campos (keyboards and vocals), Gabriel Fran?a (guitars), Ricardo Vicalvi (bass) and Samuel Joaquim (bateria). It started as a rock n' roll/blues cover band in S?o Paulo (Brazil). After some time, Daniel and Samuel left the band, leaving Ricardo and Gabriel in the search for new members.

After a while searching for new members, Gabriel decided to take on the vocals in the band and, as a trio (added drummer Marcelo), reunion started again playing S?o Paulo underground scene. Their first concert with this line-up was in 1999, on Black Jack Rock Bar. But, after a couple of shows, Marcelo left the band, leaving the drums to C?sar Augusto. They toured throughout S?o Paulo underground scene in 2000 and 2001.

In 2001 the band released a Demo CD called "No Stress, Kiss my Ass" which contained four of their songs: "Metropolis", "Rock Rock the City", the ballad "Silent Screaming" and "Virtual Lovers". The "We Need a Singer Tour 99-01" consisted of 20 concerts, in total. After the end of this tour, C?sar left the band.

Gabriel and Ricardo started, again, to look for a drummer. In 2003, Samuel returned to the band for a last concert, held again in Black Jack Rock Bar, November 28th. After this show, the band dismissed.

Hearts On The Run