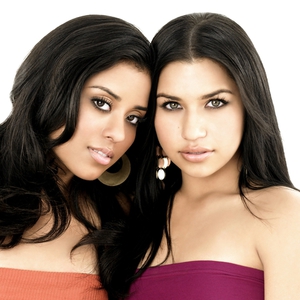 At the age of four, Jessica and Janelle ?J-Nelly? Martinez were performing at their family's traditional football events. More captivating than the paid half time act, these young girls were born to entertain. The dynamic duo, Prima J, are cousins who grew up as sisters in Rosemead, California; Prima - Spanish for cousins and J ? the first initial of their names; started out performing at high school talent shows, carnivals, and dance competitions. Coming from a very musical family, the duo always felt like being on stage was where they were meant to be.

Jessica, the sassy yet sophisticated songstress and J-Nelly, the sexy and sporty rapper are also songwriters and skilled hip hop/B ? girl dancers, who have been influenced by TLC, Janet Jackson, Paula Abdul, Aaliyah, and Gwen Stefani. ?We saw acts like the Spice Girls and the Black Eyed Peas in concert and would say, ?we want to be real performers like that!'?

Prima J was accidentally discovered by manager, Bruce Johnson, when Jessica walked by his office and overheard him listening to a track. ?I just started singing something that I had written and he loved it.? On April 4, 2006, their other manager, Jorge Hernandez introduced the group to Stefanie Ridel, singer/songwriter/producer, formerly of ?Wild Orchid? to help in developing the act. Stefanie was so impressed that she arranged a meeting with Ron Fair, Geffen Chairman, to meet with the girls and listen to their demo. Ron, who has worked with such acts as Christina Aguilera and the Pussycat Dolls, realized Prima J's natural talent and incredible energy, and signed the group on the spot.

Jessica and J-Nelly have an Urban/Pop style that is reminiscent of TLC; bringing you back to the days of when music was all about having fun and being confident. As Mexican-Americans, they feel that they can be role models to both American and Latin girls. Signed to Geffen Records with label mates such as Mary J. Blige, Nelly Furtado, and Snoop Dogg, Prima J is ready to fulfill their dreams of stardom. The 18-year olds are already paving their way to success, doing the song ?Gotta Lotta? for the Disney movie Jump, coming out January 26, 2007. Prima J is also working on their debut album, which is scheduled for release in 2007. ?Everything is moving so fast; our world has changed over night but we're super excited and ready for it all!?


Check out Prima J at www.myspace.com/primaj