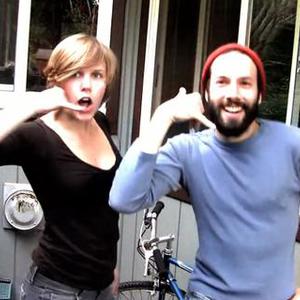 Pioneering the style of "videosongs" on popular video-sharing sites such as YouTube, Pomplamoose is a San Francisco-based indie music and indie jazz duo consisting of multi-instrumentalists Jack Conte and Nataly Dawn. Starting their online presence in the summer of 2008 and naming themselves after a derivation on the French word pamplemousse, meaning "grapefruit", Pomplamoose has garnered a strong and significant fan following ever since.

They are known for their rich and brilliant layering of a multitude of instruments, which Jack Conte defines with two rules: what you see is what you hear (no lip-syncing for instruments or voice), and if you hear it, at some point you see it (no hidden sounds). Their work has drawn comparisons to Leslie Feist, Regina Spektor, and one-man shows such as Beirut.

Everybody Wants To Rule The World (CDS)