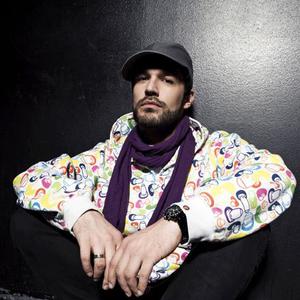 After moving to Berlin in the mid 90's, Michael Vater a.k.a Phonique was on the go like few others in Berlin. His successful parties and club nights got much love and paved him the way to become one the nice guys in Berlin's nightlife. First he only organized parties, after a while he started to DJ himself: ?DJ Phonique? was born. Since January '98, Phonique continued to bring previously lesser known DJs and producers to Berlin for his club nights and parties, presenting many strong nights with DJs like Glen Gunner (Street Corner Symphony/Block 16)...

In the meantime, Phonique continued to develop his ?freestyle? profile. His guests were treated to a splendid mix from Hip-Hop via Breakbeats to Old School and Drum?n'Bass. Just about anything was possible in between, as long as the tracks had the necessary ?type of groove?. He invited DJs like LTJ Bukem, Richard Dorfmeister and many more.

As thanks for all his efforts, Phonique was voted one of Berlin's 5 most loved DJs in Prinz magazine's poll of 2000, along with major producers and DJs such as Paul van Dyk, Westbam and Jazzanova.

Traveling the world and playing clubs in Sao Paulo, Helsinki, Paris, London, Marseille, Vienna, Brussels, San Francisco, Prague, Tel Aviv, just to name a few destinations, Phonique never forgot his Berlin base. Just like his residencies at Tresor and Pfefferbank (among others), where he brought his ?Club Paris' evening to life, with guests like Pepe Bradock, DJ Deep, Jori Hulkkonen and I:Cube.

Due to his releases on Intim Recordings in 2002 he also played a monthly residency with label head Martin Landsky at Sternradio. Since then Phonique appeared regularly at the clubs of the ?No Ufos' crew, either at Sternradio or Polar-TV.

His first two 12? were released on Martin Landsky's Intim Recordings, and from then on Phonique released on labels like Komfort Musik (Berlin), Seasons (USA), Brique Rouge (Paris) and Crosstown Rebels (London), but mainly on Steve Bug's own Poker Flat and Dessous.

Recently Phonique asserted his recognition as one of the high profile remixing artists in the dance world, letting Morcheeba's former vocalist benefit from his talents on a remix of her upcoming solo project ?Skye? (Atlantic/ Warner).

Besides Phonique's remixing talents and DJing with vinyl and CDs, he also started to edit tracks so they made more sense for his DJ-sets. When Jazzanova found out about this, they asked him to do some for their own use. So Phonique worked out some edits, partly with his buddy Dixon. Edits for Georg Levin and DJ Spinna, remixes for Georg Levin and Sirius Mo even got released on Jazzanova's Sonar Kollektiv label.

2004 then was a very successful year for Phonique.

His second 12? on Dessous ?The Red Dress? climbed on top of the official German Club Charts (DCC), ?The Red Dress? became one of the hottest tracks being played by almost every tastemaking DJ in Europe. He worked on Erlend Oye's incredibly successful DJ-Kicks (!K7) in technicals, mixing and consulting and actually played several tour dates with Erlend all across Europe.

In Autumn 2004 then his debut album ?Identification? for Dessous was released, featuring collaborations with Paris The Black Fu, Erlend Oye, Alexander East (Minneapolis), Ian Whitelaw (Glasgow) and Dixon (Sonar Kollektiv). With amazing international feedback, even a number one chart entry on Itunes' dance download charts it turned out to be Phonique's breakthrough success.

Massive Video play on German MTV's renowned ?Spin? and on Viva Plus of ?For The Time Being? with Erlend Oye took his popularity to another level. The 12" release ?99 & a half? feat. Alexander East featured one of the best I:Cube remixes in recent days and went to become a club hit immediately. The album track ?You, That I'm With? feat. Jan Whitelaw was licensed to South Africa even pre-release, where Ian Whitelwa's last track (with Alexkid ) had also been the club hit of 2003/4.

Also the single ?For The Time Being? with remixes by Alexkid and Motorcity Soul received massive positive feedback, followed by a remix by Sasse (Moodmusic), even leading to a future collaboration with Rodney Hunter (G-Stone) as they found out that their creativity combined would go beyond the framework of a remix and demanded proper recognition, as on a track for the next album.

Even for Sven V?th ?Identification? was a highlight, thus he asked Phonique for an exclusive track for legendary ?Cocoon Compilation E? among DJ Hell and Sven V?th himslef.

With the closing of Tresor in 2005 Phonique lost one of his favorite residencies, playing the Bonito House Club once a month. Since his very first Tresor Wednesday night gig of February ?99, he was fired up about the 600-1400 people crowd that would not stop dancing up until late Thursday morning?.

Since Berlin's nightlife is subject to rapid change, Phonique's residences change alike. Currently you can meet him mainly at Weekend, F.U.N. Crew's incredible venue with a view over all of downtown Berlin at Alexanderplatz. Their second compilation on Fine/ Four Music will be supported by Phonique's track ?'Bee?. Even though release is not expected before early 2006, the track already gets massive support by tastemakers like Trevor Jackson (Output) and M.A.N.D.Y (Get Physical).

Phonique mostly works with Alex Kr?ger (Dub Taylor / Korsakow / Tigerskin) for his productions/remixes, but from time to time he is cooperating with other artists or musicians like Steve Bug, David Duriez & Phil Weeks, Martin Landsky or Meitz.

Right now, besides playing a busy tour schedule from Tokyo to St.Petersburg and everywhere in between, Phonique is working on the follow up to groundbreaking ?Identification?, to be expected in spring

2006. Already being recognized internationally as one of the leading forces behind deep and forward thinking club music and commercial productions alike, this one will take it to the next level.