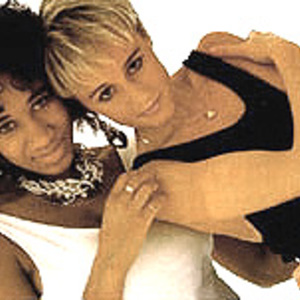 Former backing singers to WHAM!, PEPSI & SHIRLIE embarked on a solo career after that group's break-up in Summer 1986. This connection was put to great use in the UK teenage magazine market where their pop/dance style appealed to suburban audiences. Signing to Polydor Records, in 1987 the duo came out with a debut album 'All Right Now' and achieved two UK top 10 singles in 1987 with 'Heartache' (a number 2 hit) and 'Goodbye Stranger'.

Later singles - 'All Right Now' and 'Can't Give Me Love' fared less well... ('Heartache' also placed within the top 10 best selling maxi singles according to Billboard Magazine for 1987)

In 1991 followed the comeback try with less successful album 'Change'.Though it included the song 'Someday' - a fellow friend called GEORGE MICHAEL had written for them, it seemed that PEPSI & SHIRLIE's following had moved on. The album, which has been released only in Europe, failed to chart and no single success resulted. Their attempts to rehabilitate their image to that of rave club divas in 1993 fooled no-one.

Pepsi then vanished from the limelight, while Shirlie Holliman married Spandau Ballet bassist Martin Kemp, later to become the best EastEnders character for years, and they remain one of the strongest showbiz couples going. They have two lovely kids, Haley and Roman. And - Shirlie still has exactly the same short bottle-blonde hairstyle that she had in 1982.

Today Pepsi plays in the musicals at Newcastle's Royal Theatre. As INFAMY and with GEORGE MICHAEL on backing vocals she also recorded a cover version of the Dead Or Alive 1980s smash hit 'You Spin Me Right Round'. And Shirlie, also Mrs. Kemp, is doing her great job - working for the GEORGE MICHAEL fans well known ?gean Net company.