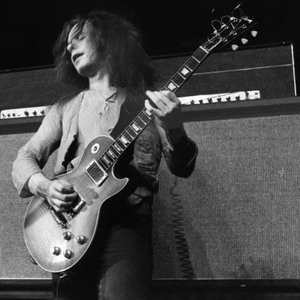 Paul Francis Kossoff (September 14, 1950, in Hampstead, North West London, England?March 19, 1976) was a rock guitarist best known as a member of the band Free. Kossoff?son of the noted British actor David Kossoff?started playing in the mid 1960s and his first professional gig was with Black Cat Bones alongside drummer Simon Kirke. The band did many supporting shows for Fleetwood Mac and both Peter Green (Fleetwood Mac's guitarist) and Kossoff would jam and spend hours discussing blues playing and players.

Kossoff?son of the noted British actor David Kossoff?started playing in the mid 1960s and his first professional gig was with Black Cat Bones alongside drummer Simon Kirke. The band did many supporting shows for Fleetwood Mac and both Peter Green (Fleetwood Mac's guitarist) and Kossoff would jam and spend hours discussing blues playing and players. Black Cat Bones also played with touring blues piano player Champion Jack Dupree. Both Kossoff and Kirke would go on to play on the Dupree album When You Feel the Feeling....

In April 1968 the pair teamed up with Paul Rodgers (vocals) and Andy Fraser (bass) to form Free. They did the "Transit" circuit for two years and recorded two albums: Tons Of Sobs(1968) and Free(1969). Both albums showcased the band's blues and soul influenced sound, a style which was in contrast to some of their progressive and heavier counterparts at the time.

Success came in 1970 when their third album, Fire and Water(1970), spawned the massive hit "All Right Now". The band played the Isle of Wight festival to both audience and critical acclaim. Sellout tours in the United Kingdom, Europe, and Japan followed, but after the release of the next album, Highway(1970), band pressures led to a split. The live album 'Free Live, recorded in 1970, was released in 1971 as a farewell record. While Rodgers and Fraser pursued unsuccessful solo projects, Kossoff and Kirke teamed up with Texan keyboard player John "Rabbit" Bundrick and Japanese bass player Tetsu Yamauchi to release the 1971 album Kossoff, Kirke, Tetsu and Rabbit.

Free reformed and released the album Free At Last(1972). Following its release Fraser decided he had had enough and quit to form Sharks. Free drafted Tetsu and Rabbit for Free's 1973 album Heartbreaker(1973) after which the group disbanded.

Rodgers and Kirke went on to form the successful Bad Company while Kossoff released a solo album, Back Street Crawler (1973). He then accompanied John Martyn on a 1975 tour before assembling a group called Back Street Crawler.
Back Street Crawler consisted of 'geordie' vocalist Terry Wilson-Slesser,Michael Montgomery-keys,
Texan rhythm section-Terry Wilson-bass and Tony Braunagel drums, now with Robert Cray.
John-'Rabbit' Bundrick replaced Montgomery on keyboards (now with The Who)

Back Street Crawler released two albums: The Band Plays On in 1975 and Second Street in 1976. Recordings from one of their UK concerts in 1975 were also released under the title Live at Croydon Fairfield Halls 15/6/75. When Free supported Blind Faith in the United States(1969), Eric Clapton was impressed enough to ask Kossoff to demonstrate his vibrato technique to him.[citation needed]

He also played on four demos by Ken Hensley (eventually released on the 1994 album entitled From Time To Time) and three tracks which appear on the CD-only issue of John Martyn's Live At Leeds album from 1975.

An unreleased guitar solo also surfaced in 2006 on the title track to the album All One by David Elliot who recorded with Paul Kossoff in the 70s.

Kossoff's unhappiness with the end of Free and his drug addictions contributed to a drastic decline in the guitarist's health. On a flight from Los Angeles to New York on 19 March 1976, Paul Kossoff died from drug-related heart problems. He was 25. He was cremated and interred at the Golders Green Crematorium.
The remaining members of the band continued with Geoff Whitehorn on guitar under the name Crawler

Leaves In The Wind (Vinyl)