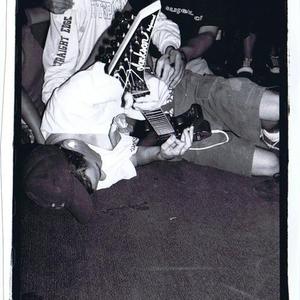 Outspoken was formed in 1990 when longtime friends John Coyle and Mike Hartsfield started writing songs together John had just finished with his band Stand Alone and Mike was done with Against the Wall. They enlisted drummer Dennis Remsing and Dan Adair to play bass, with Hartsfield handling guitar duties and Coyle covering the vocals. The band quickly recorded the Survival 7" and then followed that up with the A Light In the Dark full length 12" and CD, both of which came out on the combined labels New Age and Conversion Records.

"In those days the scene was different, not better, just different," says Coyle. "There werent as many labels or bands doing what we were doing or saying the things we were saying. You could reach more people it seemed because the idea of putting out your own music seemed like something only a few people knew how to do".

Outspoken instantly found comraderie with bands such as Inside Out, Insted, Judge and Chain of Strength. The band continued writing songs with Dan Adair leaving the band, and Jae Hansel (Mean Season taking over for him on bass. Wanting to increase the power of their sound, they also added Travis Guichard (also from Mean Season). Shortly after that Outspoken went into For the Record Studios in Orange, CA. to record the CD that for many, would come to define the mid-90s hardcore sound.

The band decided to call it quits in 1994, playing a sold out show with a bunch of up and coming hardcore bands at the Ice House in Fullerton.

A Light In The Dark (Vinyl)