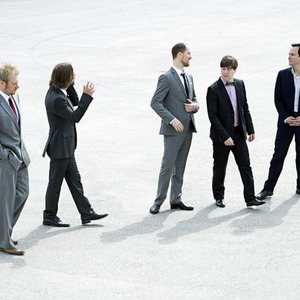 ODDJOB was born in 2005 through a love of funk. Since then, their sound has evolved to incorporate a diverse range of influences. Rare groove, afrobeat, jazz, latin & caribbean carnival rhythms and a hint of flamenco have all been thrown into the mix. This heady world-funk brew is designed to help wipe away the worries of modern life. So put away that tax return, polish your dancing shoes and get ready! About Band members: Goran Kajfe? - trumpet

Born in Stockholm, Sweden, Kajfe?' parents are Croatian. Goran started playing trumpet at the age of 10, first concentrating on classical music but later deciding to focus on jazz. He studied from 1993-95 at the Rhythmic Music Conservatory in Copenhagen.

Kajfe? has made two solo albums under his own name. The first one, Home, was released on EMI/Blue Note France. The album was highly successful and was nominated for a Swedish Grammy. On the tour connected with this project he shared the same stage with such well-known players as Nils Petter Molv?r, Bugge Wesseltoft, and Wibutee. Goran's second album, Headspin, won a Swedish Grammy for Best Jazz album of 2004. He has toured with his band Goran Kajfe?' "Headspin" in Sweden, Norway, Finland, Denmark, Mexico, Germany, France, Morocco, Spain, etc.

He has also composed and performed music for film and television. This includes a movie documentary by Swedish director Kristian Petri about Orson Welles' time in Spain titled "The Well", and the recently completed soundtrack for the Spanish movie "Hoy no se f?a, ma?ana s?".

Goran Kajfe? composed and played music for a book by Swedish writer Fredrik Lindstr?m. He has also been involved with a number of modern dance performances.

Presently he is working with Neneh and Eagle-Eye Cherry on the production of a tribute concert later this year celebrating the music of Don Cherry.

Forss was born and raised in Stockholm, where he started out playing violin at the age of eight. Playing the violin is a family tradition that goes back four generations. At fifteen Peter switched to bass, first playing electric bass, and then, after starting music school in Stockholm in 1986, studying acoustic bass.

In 1990 Forss began studies at the Royal Conservatory of Music in Stockholm, studying both classical and jazz. He has since worked as a freelance musician, playing with a wide range of Swedish artists in both the jazz and pop arena (including subbing with e.s.t.). He is also well-known as an arranger, and is especially sought after for his string arrangements. Peter Forss composed the music for the annual Swedish Televison Christmas Calendar in 1996, and in 2000 produced the CD Good for One Fare with Gothenburg-based singer-songwriter Amanda Ramsin.

In his role with Oddjob Forss plays both acoustic and electric bass, as well as a variety of bass-synthesizers, fusing a minimalistic approach with lyrical playing, and the soul-oriented groove which is the music's foundation.

Johansson was born and raised in the very North of Sweden in the village of Rusktr?sk in the region of Lapland. He started playing drums at the age of 9, then took up the clarinet, and at the age of 12 began playing saxophone.

At the age of 16 Per began studying at the local music college. In 1987 he moved to Malm? to study music at the university for the next four years.

In 1992 he moved to Stockholm. Since then, he as been working as a freelance musician, touring throughout Sweden and the world. He can be heard on over 300 albums with such world-famous artists as Wyclef Jean, Sting, Janet Jackson, Eagle-Eye Cherry, Fleshquartet, Nils Landgren, Peter Bjorn and John, Mando Diao, and Moneybrother.

Per ?Rusktr?sk? has gigged with the likes of e.s.t, the Woody Herman Orchestra, the Swedish Radio Symphony Orchestra, Bernard Purdie, Roy Hargrove, Don Alias, Fred Wesley, and Randy Brecker. Together with Jonas Kullhammar he "co-runs" the group ?Kullrusk?, and is a co-leader of the Ska-band Jobalites.
Per "Rusktr?sk" Johansson

Daniel Karlsson was born in the mid-west of Sweden in the small town of Kristinehamn in 1973. He now lives on the island of Runmar? in the Stockholm archipelago. He started playing piano at the early age of four, and studied music at Skurups Folk High School from 1992-1994. He then studied at the Royal Conservatory of Music in Stockholm.

He has been a member of several major Swedish jazz groups over the last years; they include the Fredik Noren Band, the ?Lennart ?berg Quintet and Big Band? and Dwarf ?n Tony. He has also toured and recorded with such acclaimed international musicians and groups as Ernie Watts, Peter Erskine , and the ?Andreas Pettersson Quartet?. He has been leading his own trio for the last five years, and headed the funk project ?Karlsson's Headache? from 1996 to 1999. Karlsson wrote the majority of compositions for both groups. He received the ?Swedish Jazz Musician of the Year? award in 2005. Also in 2005 Karlsson recorded and wrote the compositions for his first CD under his own name, Pan-Pan. Since 2004 Karlsson has been playing with Till Br?nner. He has recently worked with Viktoria Tolstoy, Rigmor Gustafsson, and Lisa Nilsson, among others.

Karlsson is currently working with Oddjob and Till Br?nner. Daniel also drives his taxi boat around the islands outside Stockholm.

Janne was born in the town of V?xj? in the southern part of Sweden. His given name is Jan but everyone knows him as ?Janne?. His older cousin played drums in a marching band. The band needed more drummers, and so at the age of 6 Robertson began his musical career as a drummer in a marching band. Later he studied classical percussion, continuing his studies until he was 18. By that time Janne was well educated in all aspects of classical drumming, including mallets and timpani. His goal was to play in one of the great symphony orchestras. On a whim, he applied to a jazz school (Birkag?rdens Folkh?gskola) in Stockholm and was accepted. Robertson decided to go, thus switching from classic to jazz and pop.

After studying for one year at the jazz school, he changed to the Royal Academy of Music in Stockholm which he attended for the next four years. During this period Robertson maintained a full playing schedule, touring throughout Sweden with a wide variety of jazz and pop bands.

Since his graduation from The Royal Academy of Music in 1992, he has toured and recorded with some of the most successful artists in Scandinavia. He also has his own recording studio where he is able to record live drum tracks for artists who prefer the real sound and feel of ?live? instead of programmed drums.