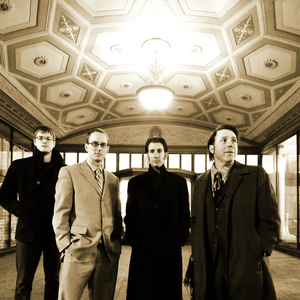 American Mars is: Thomas Trimble (vocals, guitar) David Feeny (pedal steel, guitar, backing vocals, keyboards) Garth Girard (upright bass, electric bass, backing vocals) Alex Trajano (drums) Since its inception in the late nineties, American Mars has been a musical anomaly in their hometown of Detroit. In a town often passed over by touring Americana acts and dominated by garage and punk, the band has persevered for nearly a decade with its unique brand of atmospheric roots-influenced rock.

On the group's latest record, Western Sides, American Mars has embraced a more direct approach to both songwriting and its sense of theme and place. Western Sides covers ample ground in its 11 songs, from the lonesome grace of ?Long Walk Home,? to the cutting defiance of ?Democracity,? and the whispered elegy of ?Sunray,? but under the direction of the band's pedal steel player and producer David Feeny (Blanche, Loretta Lynn, The White Stripes), the band's ranging impulses are brought together to create something more than the sum of its songs.

Says Feeny, ?On No City Fun, we built the record inside-out, started with just the skeleton of voice, guitar and pedal steel and over the next year shuttled in friends and found sounds to flesh it out. While keeping our musical aesthetic, Western Sides was approached as a band that had found a cohesive voice. The sessions were done in small doses of two or three songs each and we cut live, giving us the ability to work out all the emotions of the songs on the spot. The devils are in the details.?

Lyrically, Western Sides finds singer/songwriter Thomas Trimble exploring the themes of fidelity, fear, and desire through the eyes of characters wrestling with the baffling extremes of everyday life.

?I've always been interested in lyrics that find mystery in the everyday like ?Norwegian Wood,' or ?You Still Believe in Me,' from Pet Sounds,? says Trimble. ?Most pop songs I hear today just sound so unbelievable but I realize that at the end of day we all want songs to take us somewhere outside ourselves so that's what I was going for with a lot of the lyrics on this record.?

If Western Sides is the sound of a band exploring new ground, part of the explanation may be found in the personal journey its members had to make getting there. Recording for the record began in the fall of 2003 on the heels of the band's last shows in support of No City Fun and their appearance at South by Southwest. Sessions halted in early 2004, however, when bassist Garth Girard was diagnosed with colon cancer. As a result, the band's attention turned to assisting Garth and his family through his surgery, treatment and recovery. Band members David Feeny and Thomas Trimble helped raise over $2,500 for Garth's family by running in Detroit's annual marathon and the band added a page to its website where friends and fans could post their well-wishes. Garth was given a clean bill of health in 2006, and the band soon returned to writing and recording material with a renewed sense of mission and appreciation for each other and their music.

?Western Sides,? says Trimble, ?is about more than proving to ourselves we could still make music that we wanted to hear or that we felt made us better people. It's also about strength, commitment, and the sheer stubbornness of survival, be that physical, emotional, or spiritual. In that respect this record is as much for us as it is for the people who have followed us over the years. We really feel like we're in this together.?