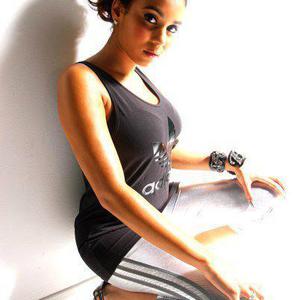 ?I think that if you cut me open, looked into my bones you would see that's where the melodies flow?. So opens north London singer, songwriter and all round bundle of amazing Ny's forthcoming single Music: a riot of pulsating synths, big wobbly bass beats and a ridiculously catchy chorus, which manages to capture the pure joy of music. It's a celebration of what music has done for Ny. And together with her debut album, Who Is She?...

Ever since she was a child - at home with her four sisters, using the percussion instruments her parents brought them, in lieu of having a television - Ny's always known she wanted to be a singer. Instead of being force-fed entertainment Ny was encouraged to use her imagination: she was taught at home until the age of ten, learnt the clarinet, and immersed herself in poetry and reggae. Her first live performance in front of an audience came in the shape of an impromptu rendition of Mariah Carey's Hero following an electricity blackout at a small club. ?I knew I wanted to do it [be a singer] but I hadn't had that reaction before: it was just me singing at home and my sisters saying 'shut up',? she explains. ?It was an amazing adrenalin rush, just really addictive. The best thing you could ever feel.?

Before that point, while school interested Ny to an extent, it soon became clear that Science and Maths weren't going to help make her a musician. So she made the decision, aged 13, that she'd only go in for Music, Drama, English and Languages...and would then focus on making headway in the music industry during this newfound 'spare time'. ?I was maybe a bit too outspoken, a bit too headstrong and I'd often just say 'I'm coming in for the subjects I want' and then I'd go. I wasn't disruptive,? she explains. ?I used to come to the Roundhouse in Camden and a little studio just two minutes down the road and I'd lie about my age. My mum was quite supportive: she believed that nurturing talent shouldn't be age-dependent.?

Around this time, Ny was already appearing on pirate radio station Freak FM, singing jingles and helping out where possible. A well-known underground DJ, XL Bass, took her under his wing, though he was later tragically murdered (?I think of him all the time. I'll never forget how he encouraged me and pushed me to do well?). After entering a talent show at the age of 15 she was approached by one of the judges (she made it to the final) about working at Bigger Fish - a music company that staged under 18s raves. ?It was everything from organising travel cards to a bit of stage management; planning meetings and making sure the artists were on the stage at the right time,? she says of her time there. One of the people she met was Ms Dynamite who asked her to join her on tour; not to perform, but to watch and learn. A 15-year-old Ny's music apprenticeship was evolving, giving her the experience that so many new talents simply don't have. ?It taught me that I could go in a room and not be shy to talk to anybody; to know that if you believe in what you're doing, you've got to make other people believe in what you're doing.?

Initially raised on a mix of pop, R&B and reggae, Ny also started to get into grime as a teen. ?It gives me the freedom to say what I want and be what I want. It was like doing poetry but over a beat. It's not the aggression; it's the passion that comes out.? She also revelled in the fact that she was a woman in a male-dominated genre, knowing that people were wrongly underestimating her. It was this headstrong spirit that saw Ny go on to work with the British Council at The Roundhouse, in conjunction with a wealth of well-known African artists. ?It was amazing,? recalls Ny, ?because we got to go and perform in places like Ethiopia, Kenya, Tanzania, and sang for the Queen at the Commonwealth Conference in Uganda. My dad has lived in Ethiopia for ten years: he works for Save The Children, so I go there every year now.?
By the age of 17, then, Ny's fierecely independent streak took over: she moved out of her mum's house and moved in with her then-boyfriend Wiley (and her beloved dog). From there Ny started singing on people's beats, balancing her own work with extended projects in the local community (teaching kids how to sing, some of whom would go on to join her onstage). Before long, Ny decided it was about time to do her own mix-tape. She flicked through her bulging book of contacts, got friends Plan B and Professor Green on board and asked Wiley to help out. Not that it was charity; ?He was never like 'I'd get it for you', he would just give me the producer's number and let me do the rest.?

With the first mix-tape done (Ny sold them on CD for a fiver around the West End), a follow-up was released to great acclaim. Having worked up an album's worth of tunes, in 2011 she started personally emailing out the futuristic slice of R&B gold that is Be With You (the video to which has now had over a quarter of a million views on YouTube) to various radio stations. This saw it selected as Record of the Week at 1Xtra and gaining airplay on the Chris Moyles and Fearne Cotton shows. All of this occurred while still unsigned. From there Ny took a leap and joined best friend Tulisa and the rest of N-Dubz as support on their UK arena tour. ?For me, doing arenas was next level. You don't really get the chance to sit and think about it, and I hate sitting down: I've got ants in my pants. I'm always thinking 'what do I have to do next?'?

Well, next is the brilliantly-tiled Who Is She?, the debut album released via Ny's own Dream Juice label (under exclusive license to Cooking Vinyl). Opening with the squelchy, drum clattering and visceral new single Music, it's a record that takes in the full gamut of the current UK music scene, touching on elements of dubstep, grime, house, pure pop and the general melting pot of influences that have influenced Ny throughout her life. Highlights include the cheeky, dance-inflected R&B of Trophy Boy (?Think I'm really looking for a trophy boy, someone to ride on the passenger side? runs the chorus) and the more aggressive, grime-tinged wobble of Burn It Down. Curveballs abound throughout, not least on the gorgeous rush of Over, which is built around the simple strum of a guitar and big echoey drums, and the hauntingly beautiful Dark Side, which marries Ny's soulful vocals to a delicate piano figure and intricate drum claps. Staying true to her UK underground roots, guests include rappers Giggs and Ghetts, whose dark and imposing rhymes juxtapose spectacularly with Ny's voice, which itself has an uncanny ability to flit between soothing and scathing in an instant.

From her patient beginnings to her ability to draw from her collaborators while still maintaining a sense of who she is, to her passion for the UK music scene that embraced her, it feels like it's finally Ny's time. ?For me, music's been a huge factor - like another parent, then a boyfriend, then it's been a friend and then it's been a child when it's acting up. It feels like it's trapped you in a little bubble and you don't even want to get away from it.? She has no doubt about her own destiny, either. ?The only thing I want is that when I die, I die a legend. That's what I want. I believe it will happen.? No one can stop Ny.