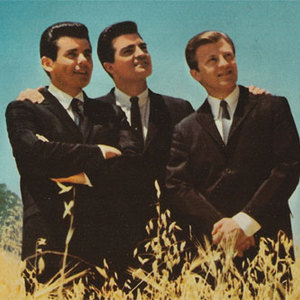 The Lettermen are an American pop music vocal group. The Lettermen's trademark is close-harmony pop songs with light arrangements. They were popular mainly with adult audiences during the 1960s. The group was formed in late 1950s by Mike Barnett, Dick Stewart and Tony Butala. They auditioned for Jackie Barnett, chief comedy writer for the Jimmy Durante TV show. They landed the part to impersonate The Rhythm Boys, the vocal group that traveled with Paul Whiteman and his orchestra in the late 1920s, and gave Bing Crosby his initial fame.

The group was formed in late 1950s by Mike Barnett, Dick Stewart and Tony Butala. They auditioned for Jackie Barnett, chief comedy writer for the Jimmy Durante TV show. They landed the part to impersonate The Rhythm Boys, the vocal group that traveled with Paul Whiteman and his orchestra in the late 1920s, and gave Bing Crosby his initial fame. The "Newcomers of 1928" review opened on 28 February 1958 at the Desert Inn in Las Vegas, Nevada. This review also starred Paul Whiteman, Buster Keaton, Rudy Vall?e, Harry Richmond and Fifi D'Orsay. They played to sell-out audiences and were held over for many weeks. This review also played a six week review at the Deauville Hotel in Miami Beach, Florida, with Butala being the only consistent Letterman. Barnett and Russell were replaced by Gary Clarke and Jerry Paul. When the review ended, Butala landed a job as singer/bass player in a lounge group, "Bill Norvas and the Upstarts", with Gary Clarke. After a few months, Clarke left the group and was replaced by Jim Pike. Pike and Butala decided to leave the Upstarts and resume the Lettermen although they had not yet decided to use the Lettermen name. Pike envisioned a group where each member was an excellent soloist as well as a competent group singer. Pike recommended the third Letterman should be Bob Engemann, a singer that Pike had met when he attended Brigham Young University a few years earlier. Both had come to Los Angeles, California, and sang together in different combinations until Engemann had go into the National Guard for 6 months. At that point, Pike joined Bill Norvis and met Butala. This combination first recorded in late 1959.

They secured a recording contract with Warner Bros. Records through Bob Engemann's older brother, Karl Engemann, who was a record producer there, and for whom Pike had released a record earlier called "Lucy D", which was not successful. Pike, Butala and Engemann as "The Lettermen" released two singles in 1960. The A-sides were "Two Hearts" and "There Hearts Were Full Of Spring". They were not successful. Karl Engemann moved on to Capitol Records as President of A&R. He got them out of their contract at Warner Bros., and made an appointment with Nick Venet, a producer at Capitol and they were signed.

There was another "Lettermen" group in the late 1950s and early 1960s that recorded for Liberty Records, (which was a major label at the time). They were an R&B group with five members, and their single was called "Hey Big Brain". But the "Lettermen" of Pike, Engemann and Butala had the first hit record, so they were entitled to exclusively use the "Lettermen" name. There was also a group in the mid 1950s called The Lettermen Trio, but had no record success.

The Lettermen were unknown until they signed with Capitol Records in 1961. Their first single for Capitol, "The Way You Look Tonight," succeeded on the Billboard Hot 100 pop chart, and their next, "When I Fall in Love," reached the Top 10 in late 1962. They had several other Top 10 hits, such as the 1965's, "Theme From A Summer Place". In late 1967 Bob Engemann resigned, and was replaced by Jim Pike's younger brother, Gary Pike. The hits continued with the 1968 medley "Goin' Out of My Head"/"Can't Take My Eyes Off You", and in 1968 with "Put Your Head on My Shoulder", plus 1969's "Hurt So Bad", which reached number 12. The last successful single was in 1972, "Love" a solo by Pike.

The Lettermen have had 32 consecutive Billboard Magazine chart albums, 11 gold records, five Grammy nominations, an Andy Award, and a Cleo Award. In 1976, Jim Pike left the group and sold the Lettermen name to Butala.

In 1981 Gary Pike left the Lettermen, and today Jim and Gary Pike, along with Ric de Azevedo, sing The Lettermen hits, billed as Reunion.

In 1961, The Lettermen started performing live concerts doing over 100 shows a year, an unbroken string that continues to the present now amounting to 46 years.

Over the decades, the group has had various line-ups, replacing members who left for various reasons with new people to maintain a trio. Tony Butala, who (as of 2007) is still a member, has stated that the group ethos is that of three strong soloists that harmonize, and that the group encourages individual singing and songwriting.

They pride themselves in welcoming audience member photographs during the show, unlike many recording acts.

Once Upon A Time (Vinyl)