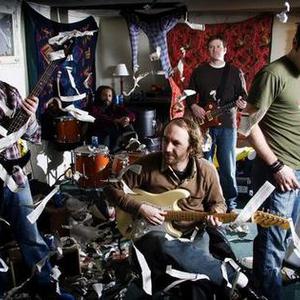 Originally a basement-dwelling partnership between band founders Jake Bellows (vocals/guitar) and Heath Koontz (bass/vocals), the two eventually became bored with their isolated state and recruited three others to help them move their sound from the basement to the stage. After several incarnations, Neva Dinova finally found a solid line-up with Tim Haes (guitar), Mike Kratky (guitar) and Bo Anderson (drums) and began playing shows around Omaha.

They gained respect very quickly from their musical peers. However, with The Faint, Bright Eyes and Saddle Creek Records focusing the nation's musical eyes on Omaha, the as-of-yet unsigned Neva Dinova seemed to be left behind, destined to be the respected, yet unsung hometown heroes.

Fortunately, that all began to change.

After having recorded and compiled their own record in 2001, the whisperings about Neva Dinova began to get louder. A copy of their debut effort found its way into the hands of respected indie label, crank!, who quickly signed the band and released the eponymous debut in 2002. The album was met with tremendous critical acclaim, including being lauded as a "Top 10 Release of 2002" by the Los Angeles Times. Though the band enjoyed one lengthy sold-out tour with Omaha heroes (and former crank! artists) Cursive, their remaining tour attempts were fraught with trouble and left the album floundering as simply a rare find amongst the musical cognoscenti; that is, until a long-standing hometown friendship catapulted Neva Dinova to the forefront of indie rock.

Neva Dinova's main songwriter, Jake Bellows, and indie rock hero Conor Oberst of Bright Eyes fame, had discussed a musical collaboration for years. With conflicting schedules, however, it never seemed to come to fruition. Suddenly in late 2003 Jake and Conor found themselves both in Omaha for weeks at a time. Conor and Neva Dinova with new drummer, Roger Lewis (also of The Good Life) quickly recorded six songs together, each writing three songs but playing on all six, and in mid-2004 crank! released the highly anticipated collaboration, "One Jug Of Wine, Two Vessels." The release was lauded as a masterpiece and began selling instantaneously, driven by acclaim from powerful media like MTV, Rolling Stone, Spin, New York Times, Los Angeles Times, Blender, Jane, Alternative Press and many others. The record skyrocketed up the college radio and Billboard Independent charts. Suddenly Neva Dinova was on the tips of people's tongues.

Just a few months later, Neva Dinova finished recording the eleven songs for their second full length, re-released The Hate Yourself Change. From the first listen it is clear that Jake Bellows' songwriting has matured and flourished. The many who were overly impressed with Neva's work on "One Jug..." will be blown away by the new release. His uncanny ability to subtly integrate infectious melodies into non-traditional rock song structures continually sets him apart from indie rock's numerous songwriters, as a writer who will stand the test of time. And when he belts into the power of "It's a dream" (from "The Blackest Heart"), one can't help but feel light-headed with anxious energy. And the Iggy Pop-meets-Leonard Cohen pop infectiousness of "A Picture In Pocket" will have you hitting the repeat button on your stereo incessantly.

It's 2008, "You May Already Be Dreaming" is now out. It is an album of lush, relaxing and fluid dreams, and is now out on Saddle Creek Records. Check it out.

(SADDLE CREEK WEBSITE) Neva Dinova are treasured heroes of the Omaha music scene. Originally started as an impromptu songwriting collaboration between guitarist and vocalist Jake Bellows and bassist Heath Koontz, the two eventually got bored of their basement seclusion and decided to enlist the support of others. What they created was a five-piece musical tour de force, that includes guitarists Tim Haes and Mike Kratky, and drummer Roger Lewis (also the drummer for Saddle Creek's The Good Life). After years of playing around the mid-West, the five-piece have developed a loyal fan base and spawned an ever-expanding audience. Sonically, the presence of three guitarists has allowed for rapid development of the band's trademark sound, marked by swirling countermelody and assorted textures. It is around this musical fabric that Bellows' truly inspiring, poetry-based lyrics are centered and from where the Neva Dinova critically acclaimed signature sound has developed.

You May Already Be Dreaming

The Hate Yourself Change