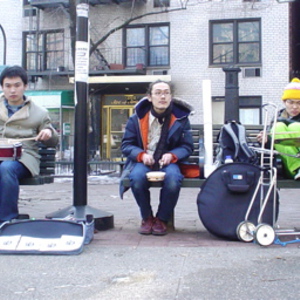 Na first formed in Seattle in the early 21st Century, with all three members of the musical project arriving from Japan and taking classes at Shoreline Community College. After moving past perfunctory discussions of pink shoes and John Cage, they began to collaborate on what is usually termed "experimental music." Music that is self-consciously experimental often has an air of pretentious impenetrability about it; few and far between are the truly experimental musicians who are able to beat bold new paths through the musical wilderness.

They simply don't have enough hands to simultaneously play their instruments and cradle their fragile egos. Their music, a strange quilt of aural patches woven from guitars, mouths, child's drum sets, keyboards, xylophones, computers, drum machines and piles of ancient, dented cymbals, gives the distinct impression that it is choosing the direction, not the players.