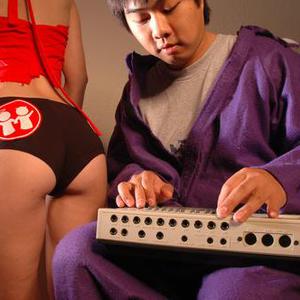 Born in Taiwan R.O.C. to rocket scientist father and kindergarten teacher mother, David Wang (a.k.a. Mochipet) has been tinkering with electronics all of his life. However, it was not until he added music to the equation that something began to spark. Growing up on metal guitar, Avant-Garde Jazz, and mainstream hip-hop, David has always been a person of diversity. And we can see this in his music, ever changing, and always evolving.

David's music has caught the ears of the Sports and Skateboarding world as well. His song Sharp Drest (With Eric Solo and oonceoonce) is featured in the NBA2k9 Videogame along side acts such as Beastie Boys, N.E.R.D., and The Cool Kids. You may have also heard his music on FuelTV and Directv with skate legends such as: Tony Hawk, Lance Mountain, Christian Hasoi, Ray Barbee, Laban Pheidias, Jason ?Weeman? Acuna, and Anthony Van Engelen.

David has also held residencies at [Eraser] Club (Los Angeles) and Trouble Club (San Francisco) along side residents: edIT, [a]pendics shuffle, John Tejada, Kid606, Josh Kit Clayton, Matt Laszuk, Philip Sherburne, and Sutekh. He is currently staring up a new monthly in San Francisco called Bass Camp with EC and ArtNowSF that will feature acts from around the world.

And if all this is not enough he was nominated as one of the Best Electronic Act of 2008 by many publications, such as Clash Magazine (UK) and SFBG. His composition ?Dessert Search for Techno Baklava? has been performed by a 20 piece orchestra, Alarm Will Sound, around the world, notably at New York's Carnegie Hall, and Amsterdam's Holland Festival!

David runs an independent record label called Daly City Records and endorses products such as M-Audio and Puma. He is currently working on several new projects including ones with Joyo Velarde, Lyrics Born, Antipop Consortium's M. Sayyid, and Chicago's MC Zulu. Keep an eye out 2 new records from him in 2009: ?Master P on Atari? and ?Bunnies & Muffins,? both coming out on Daly City Records this year!

Toph One (XLR8R)
?keep an ear on that Mochipet character?his shit is DOPE.?

San Francisco Bay Guardian
"Microphonepet" demonstrates that Mochipet is an amazingly skilled producer who can effortlessly shapeshift from his known style to produce one of the best hip-hop albums this year. - Billy Jam

KEXP (Seattle, WA)
?beats spanning the hip-hop and electronic genres, often combining the two in memorable fashion?you barely have to lift a finger to enjoy this? ? Kevin Cole

Trey Spruance (Secret Chiefs 3 / Mr. Bungle)
?Fucking incredible. Who are you? What the hell are you up to??...Let's just say that only a fool would not recognize your "adeptness"? Clearly you are someone with enormous musical training - good to see it didn't ruin your vision as an artist. Nice work. I dream of the possibilities..."

edIT (The Glitch Mob)
"Mochi, keepin' it hyphy for the asians. Lyrical giants vs. they Might be giants is still the shit!"

Lazersword (Briefcase Rockers)
?thanks for all those ?. infinite heat rocks!?

FLUOKIDS Pharrell (France)
Mochipet ?.soft and pop, slow fox trot, rubs your buttocks more gently please, I want to take my time like turning the first 25 pages of pub of my magazine of mode, mode.

MISSILL (Paris, France)
?WOW, i didnt take a slap on my face like dat since a while.. wow wickeed album !!!...well done, big respect?

People Get Real - Wax:On
?I can see me playing this to tempt people onto the dancefloor....all good.?

Richard Devine (Warp Records)
?I have been listening your shit all the time lately. Its fucking sick! I love your music!?

XLR8R
?No one does futuristic, weirdo hip-hop quite like David Wang under his Mochipet guise?.?

Tiny Mix Tapes
?You have to wonder how much this Wang guy is capable of. We may be looking at the second coming of Luke Vibert, only with a better sense of humor??

Time Out New York
Forget all that talk about Estelle's "American Boy," this is the song of the summer?Bay Area producer Mochipet capture the perfect summer afternoon?? - Claire Madigan

East Bay Express (Bay Area)
?Shows a knack for innovation that separates Wang from the pack? Wang's ability to keep innovating has given him real staying power in an increasingly fickle electronic music scene. He now belongs to an elite class of Bay Area DJs,? - By Rachel Swan


Boomkat (UK)
" Mochipet sound has come a long way since those early mash-ups and mixes that made his name, and here Wang sounds every bit the highly accomplished electronic musician, approaching hip hop from a fresh, experimental angle."

BBC
?blends some of the more dissonant moments of Kid 606, Hrvatski and Lexanculpt into cut and paste drill and bass?

Absorb
?hearing this evokes the kind of feelings and wild imagery that kids in the 30s must have felt the first time they heard jazz, or swing, or that drum solo kick in?

Outsight: The Tommies 2002
Mochipet creates dense works of breakbeats and soundbites. There is a real absurdist quality to the music. ? Tom Schulte

LiWei, Chiang (Recorderz Taiwan)
?ur music fucking rockz! btw, it would be great if u ever come back to taiwan, and do a live set!?

Fat Planet (Sydney, Australia)
?Glitch, Dubstep, Jazz, Funk, Afrobeat, and Computer Rock?a tight slab of electro-funk, a Euro-esque Baltimore jam that points to the fact that the Mochipet pony has more than a just a singular kick in its repertoire.?

West Coast Performer
?This is not a symphony of staffs and strings, but of ports and plugs. The conductor is located stage right, peering at the screen of a borrowed Mac desktop. His given name is David Wang, but tonight he goes by Mochipet ? -Nate Seltenrich

Future Music Magazine (UK)
?It's the sort of track any ad guy could use on a mobile phone campaign to instantly propel David to the kind of status enjoyed by R?yks?pp and a hundred other rich royalty collecting acts...?

ReGen Magazine
?You have to have a certain credibility amongst your peers and a certain respect from your audience. And you have to have a bunch of awesome talented people that are just waiting to get their dirty hands on all the work that's made you into such a worthy star in the first place. Mochipet is just such an artist?

KALX
?OMG I am sooooo obsessed with the Mochipet record. I LOVE IT!? - Keli Rivers / Tyler Mccauley

KCPR
?Definitely one of our favorite records of the last couple months. I play it on my show all the time!?

WVUM
?Daly City is one of my favorite labels today. The record will kill and is already crackin?

KSSU (Sacramento, CA)
?how could you not love Mochipet. I like this one - its more club?