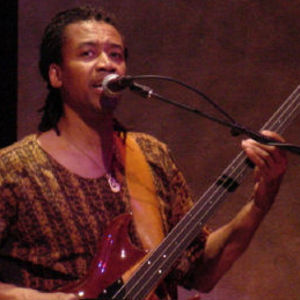 Alphonso originally started off as a horn player, but he would eventually switch to the bass in his late teens. Beginning his career in the early Seventies, Alphonso was amongst the few electric bassists of his time that showed innovation and fluidity on the electric bass. He sessioned with a few jazz musicians before landing the Weather Report job taking over for co-founding member Miroslav Vitous.

Alphonso's silky, but authoritative bass lines had placed him in a class with fellow peers Stanley Clarke and Steve Swallow as one of the best up and coming bassists of the early 70's.

Beginning with Weather Report's Mysterious Traveller songs like "Cucumber Slumber" and "Scarlet Woman" just hinted the brilliance of what he could do. Alphonso would appear on two more albums for Weather Report before he would leave the band to work with drumming virtuoso Billy Cobham.

Alphonso also happens to be one of the first musicians to introduce the Chapman Stick to the music public.