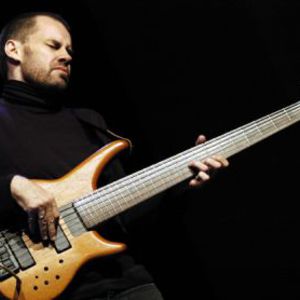 Jonas Hellborg (born June 7, 1958) is a Swedish bass guitarist. He has collaborated with John McLaughlin, Bill Laswell, Shawn Lane, Jens Johansson, Michael Shrieve, V. Selvaganesh, Mattias IA Eklundh and Buckethead. He began his music career in 1976 in Sweden touring with local Rock Acts. In 1979, he was spotted by percussionist Reebop Kwaku Baah in a small club in Stockholm. He moved to London for a year to work with Reebop on different projects.

He began his music career in 1976 in Sweden touring with local Rock Acts. In 1979, he was spotted by percussionist Reebop Kwaku Baah in a small club in Stockholm. He moved to London for a year to work with Reebop on different projects. Hellborg played the Montreux Jazz festival in Switzerland in 1981 and met Mike Brecker who introduced him to John Mc Laughlin, Billy Cobham, and other fusion stars. McLaughlin asked him to join the newly reformed Mahavishnu in 1983. Hellborg stayed with Mc Laughlin until 1988 touring and recording with Mahavishnu and also doing several duet tours with McLauglin. In 1986 and 1987 he toured with a project featuring Ginger Baker on drums and Bernie Worrell on keyboards.

In 1988 he moved to New York started his own band which first included keyboardist Aydin Esen and drummer Kenwood Dennard, later the Johansson Brothers Jens on Keys and Anders on drums. At the same time ha started a recording studio together with producer/Bassist Bill Laswell called Greenpoint Studios. A multitude of records were recorded there until early 1993, including The Word together with Tony Williams, Octave of the Holy Innocents with Mike Shrieve and Buckethead, Materials Hallucination Engine, E with the Johansson Brothers.

In 1993 he sold his part in the studio to Laswell and resettled in Paris, France. The following year he teamed up with guitarist Shawn Lane, a cooperation that would last 9 years. The first record was ?Abstract Logic? with Ginger Bakers son Kofi on drums. Followed by Michael Shrieve's ?Two Doors?. By the third record they were joined by drummer Jeff Sipe and embarked on long stretch that produced 4 records and a lot of touring between1995 and 1997.

In 1998 Hellborg met percussionist V. Selvaganesh at a Zakir Hussein concert in Paris. The two formed another long lasting musical partnership that has been ongoing since then. To start with Selvaganesh joined Hellborg in duets and in different ?classical? settings Hellborg was working on at the time. Later a group was formed first in Trio with Lane then grew into a quintet including Selvaganesh's 2 brothers V Umashankar and V. Umamahesh. 2 Cd's and a DVD were produced with this group. Since Shawn Lane's tragic death in 2003, Hellborg has continued to explore amalgamations of Indian and "western? music, working with such Indian masters as Debashish Bhattacharya, Niladri Kumar, Vikku Vinayakram, Tanmoy Bose, and U Shrinivas. He has also started a new Metal-Fusion project with guitarist Mattias IA Eklundh called Art Metal.

Hellborg founded his own record label Day Eight Music in 1979 releasing his first solo bass record The Bassic Thing ? an early showcase of his pioneering chordal, and for the time very advanced, slapping approaches. It is also noteworthy that it was the first LP ever to feature solely bass guitar. With the move to the US a new entity was formed called Bardo Music that took over the responsibilities of Hellborgs output now counting around 40 odd releases.

Hellborg has been involved in instrument design from early on in his career. Starting with a signature model for the Japanese company Aria, the first ever biamped Bass Amp in cooperation with Italian company FBT, a double neck bass, fretted and fretless, for British company Wal in 1983 and the invention in 1984 of the modern Acoustic Bass Guitar in collaboration with/built by master luthier Abraham Wechter. After working with a further half dozen of other companies with signature models and inventions he now, together with Warwick Basses, created a new bass and a high end line of bass amplification that incorporates a set of innovations not yet seen in any other bass amp.

Hellborg has published 2 books in the early 80's with Music Sales of London. One (maybe the first ever) on Slap Bass called Thumb Bassics and a chord book (definitely the first ever) called Chord Bassics.

Aram Of The Two Rivers (Live)