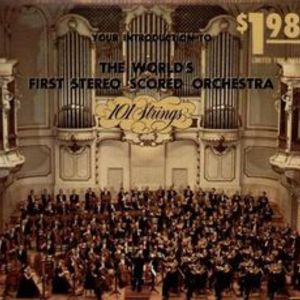 101 Strings was an umbrella term for a highly successful easy listening symphonic music organization, with a discography exceeding a hundred albums and a creative lifetime of roughly thirty years. Their LPs were individualized by the slogan "The Sound of Magnificence", a puffy cloud logo and sepia-toned photo of the orchestra. According to the photograph, the 101 Strings orchestra was composed of 124 string instruments (all male except for the harpist) and was conducted by Wilhelm Stephan. The orchestra's famous official photograph was taken in the Musikhalle Hamburg.

In reality, of course, the recordings also featured a full brass, woodwind and percussion section, and not quite as many strings as are shown in the photograph. In later years (right up to the 80's), the recordings were made by a session orchestra in London, with a line-up including a modern "pop" rhythm section. In the late 1990's, the 101 Strings Orchestra was revived with "The New 101 Strings Orchestra" for a series of modern recordings.

The Beatles Volume One

The Heart Of Ireland