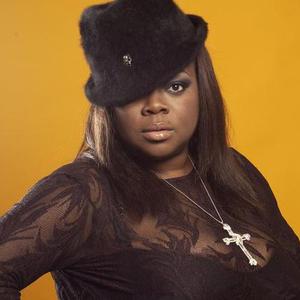 Michelle Weeks, a native of Brooklyn began her singing career in her grandmother's kitchen at the age of 18months where she sang, "Yes Jesus Loves Me" on her kitchen table. "That girl's gonna be a singer" her grandmother said to her mom and the rest is history. At the age of four she began singing with the Institutional Children's Choir and at age 13 she portrayed the role of young Mahalia Jackson in the Musical based on her life called Mahalia. Also at the age of 13 Michelle was crowned Ms New York for Hal Jackson's Talented Teens and she won 2nd place at the international pageant.

Michelle has traveled through out the US, Europe, Asia and Australia.
She has performed at Lincoln Center, Julliard and many other major music halls. Michelle has been in a number of stage productions including "The Me Nobody Knows", "Godspell" and "The Tap Dance Kid" where she made her Broadway debut. Her role as the Queen of New York in the Las Vegas production of Madhattan afforded her the opportunity to perform for stars like Debbie Allen, Ben Vereen, David Cassidy and James Ingram just to name a few Michelle also starred in the cult film classic "Little Shop Of Horrors" where she played the role of Ronnette. She has also been heard on various commercials, soundtracks and as a background vocalist on numerous recordings.

Michelle has a long list of recordings she has been featured on as lead vocalist including; "Glory to God" from Handel's Messiah a Soulful Celebration, "The Moment of My Life" with Bobby D'Ambrosio, "Don't Give Up" with M&S, "The Light" and "Be Thankful" with Jaime Lewis and more recently "Turn It Around" with DJ Disciple. She has a few songs in the works with producers like Ron Carroll, 1200 Warriors, Moca Productions and a few others. At present, Michelle is working on an EP and an album for sale through her website and for future distribution.

Michelle's main goal in life is to heal and help people through her music, which she calls her ministry. She feels that inspiration through music can heal broken hearts, save a person's soul or just lift someone's head up when they're going through rough times. Michelle thanks God for the anointing placed on her life through the gift of song wherewith she can reach out to people all across the world.