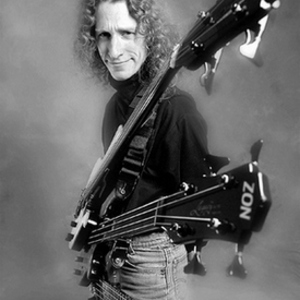 Michael Manring (born 1960 in Washington, D.C.) is an electric bassist from the San Francisco Bay Area (Northern California). In addition to a tenure as the in-house bassist for Windham Hill Records, Manring has recorded with Michael Hedges, Alex Skolnick (in the bands Skol-Patrol and Attention Deficit, also featuring Tim Alexander from Primus), Larry Kassin, Tom Darter, Steve Morse, David Cullen, and many other noted musicians.

He has been a member of Yo Miles!, Henry Kaiser and Wadada Leo Smith's Miles Davis tribute band, since its inception. He remains active, touring the world for performances and clinics. Manring studied with Jaco Pastorius.

Manring is regarded as a technical virtuoso, using the bass as a solo instrument and frequently taking advantage of unusual alternate tunings. Manring occasionally plays on two (or even three) basses at the same time during live performances.

He is known for playing and endorsing Zon basses -- specifically, the Zon Hyperbass, an unusually flexible four-stringed instrument which Manring co-designed with Joseph Zon.

The Book of Flame

Toward The Center Of The Night