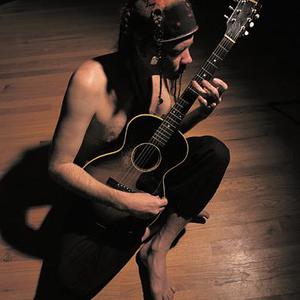 Michael Adam Hedges (December 31, 1953 ? December 2, 1997) was an American composer and acoustic guitarist born and raised in Enid, Oklahoma. He is widely considered to be one of the greatest and most influential solo acoustic guitarists of all time. His music features his own unique performing style which features harmonics, fingerpicking, knocking and slapping. Michael Hedges was a conservatory composition major who applied his classically trained musical background in combination with radical innovation to ?reinvent? the steel string acoustic guitar.

Michael Hedges was a conservatory composition major who applied his classically trained musical background in combination with radical innovation to ?reinvent? the steel string acoustic guitar. He combined many unusual techniques on the acoustic guitar with a wide range of musical styles, and was also considered a dynamic performer in concert - in short, a ?Paganini? of the guitar.

He is known for extensive use in several pieces of two handed tapping techniques (nearly a contrapuntal style of multiple voices). He used the fingers of his right (typically picking) hand to slap harmonic "chords" at the 12th, 7th or 5th fret (or elsewhere). He made use of right hand hammer-ons, particularly on bass notes, and often used the left hand for melodic or rhythmic hammer-ons and pull offs, as well as unusual strummings, that played, as mentioned, independent voices to the right hand. These techniques tended to convert the guitar into a quasi-keyboard like instrument for certain musical purposes. He also made extensive use of string dampening as employed in classical guitar, and was known to insist strongly on the precise duration of sounds and silences in his pieces. Other facets to his playing were percussive slapping on the guitar body and extensive use of artificial harmonics. He also played guitar-variants like the Harp Guitar (an instrument with additional bass strings that Hedges used to play Bach's Prelude to Cello Suite #1 in G Major in its intended key), and the Trans-Trem Guitar.

Michael Hedges was discovered by William Ackerman who heard him performing in a Palo Alto cafe (the former Varsity Theater) and immediately signed him to a recording contract (1980). For several years Hedges toured and performed in concert with Ackerman. He also appeared on several of Ackerman's albums. In turn William Ackerman produced Hedge's first two albums.

The first two records Michael Hedges made - Breakfast in the Field and Aerial Boundaries - were milestones for the acoustic guitar. He then branched out into singing and performing more popular forms of music, although he would periodically make a return to more guitar-centred music. His record Oracle won the 1998 Grammy for Best New Age Album. Hedges was in fact quite a multi-instrumentalist, playing piano, percussion, tin whistle, harmonica, and flute, among others on his albums. Bassist Michael Manring contributed to many of Michael's records.

Many acoustic guitarists claim a very broad range of influences and will not fit into any genre, but this was truer of Hedges than of any other. His musical education was largely in modern 20th century composition. He listened to Leo Kottke, Bruce Cockburn, Martin Carthy, John Martyn, John Fahey, and the Beatles, but his approach to composition owed much to Stravinsky, Var?se, Webern, and experimental composers such as Morton Feldman. He saw himself as a composer who played guitar, rather than a guitarist who composed music. He was often categorized as New Age due to his association with the Windham Hill record label. Somewhat in reaction to this, he would describe his music as "Heavy Mental", "New Edge", ""Thrash Acoustic", "Deep Tissue Gladiator Guitar" or "Savage Myth Guitar," amongst other terms.

Hedges was killed in a car accident in 1997 at the age of 43. His unfinished last recordings were brought to completion in the album Torched, with the help of his friends David Crosby and Graham Nash.

The Road To Return

Live On The Double Planet

Watching My Life Go By