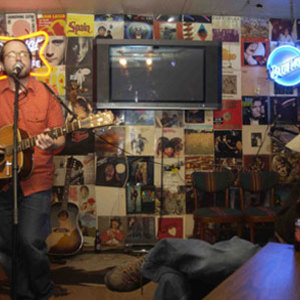 Dan McCarthy has remained Omaha's best-kept secret for the past five years-or-so, despite having toured with the likes of Mayday, Neva Dinova, The Good Life, Orenda Fink, Maria Taylor, and Bright Eyes, and despite having recorded with Cursive and Tilly and the Wall (Keys on the former's "Happy Hollow," and accordion! on the latter's "Bottoms of Barrels"). McCarthy Trenching is what Dan does when he is not lending a hand (or both) to his friends, and Trenching's epoymous debut may force McCarthy to finally forfeit his secret status.

McCarthy Trenching is what Dan does when he is not lending a hand (or both) to his friends, and Trenching's epoymous debut may force McCarthy to finally forfeit his secret status. The record is an amalgamation -- a best of, if you will -- of two previously self-released titles and the results of five years of songwriting.

Half of the album comes from his nine-song 2003 demo "Old Habits" that was recorded by Ted Stevens in the bowels of an old white house that has since been leveled; a mixture of bar songs and waltzes born of nights at a naugahyde stool.

The other songs, recorded over the two following years, were originally featured on "It's Got Nothing to do with Drinking". Slide out from the bar stool, pack a traveler in the coat, maybe light a cigarette (or two), and open scope against a backdrop of piano, electric guitars and commanding acoustic melodies.
The result is "McCarthy Trenching," a mixture of tear-in-beer waltzes, anthemic drinking songs, and restless tunes of longing that take you from the bar to the road to the track to the morning after and back to the bar again, just in time for happy hour.