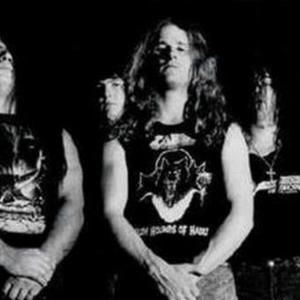 1. Massacre was a U.S. improvising and experimental rock band from New York City formed in 1980 by guitarist Fred Frith with bassist Bill Laswell and drummer Fred Maher. They performed for just over a year and recorded a studio album, Killing Time (1981).

In 1993 RecRec Music reissued Killing Time on CD with six extra tracks (one of them coming from Frith's Speechless album).

In 2005 Fred Frith released a remastered version of Killing Time on CD on his own label Fred Records with the six extra tracks from the RecRec reissue, plus two previously unreleased tracks.


2. Although Massacre were hampered by unstable line-ups for much of their career, they, along with Morbid Angel and the late Chuck Schuldiner (RIP), helped originate and shape the genre of Florida Death Metal and have influenced countless bands that came later- everyone from Napalm Death to Entombed cite them as a major influence. Pre-Massacre, both Kam Lee and Rick Rozz were original members of Death along with Chuck. Death was still unsigned at that time, making demos as a three piece (playing without bass), and Kam himself drew the famous Death logo. Kam is widely acknowledged as being the originator of the gutteral death-growl vocal style which has since become the de-facto standard in Death Metal.

Massacre played countless shows in mid 80's Florida before the spotlight fell on the area, influencing the later wave of bands from Deicide to Obituary to follow their lead. The band were put on hold however, when Chuck Schuldiner relocated back from LA to his native Florida and promptly recruited Rick, Bill and Terry to record the second Death Album ?Leprosy?, for Combat Records . After completing commitments to Death, Massacre finally regrouped in 1990, signed with Earache, and entered Morrissound Studios in Tampa Florida, with UK producer Colin Richardson at the helm to finally deliver their debut album ?From Beyond?. Though released much later than many of their death metal contemporaries, all the songs recorded were from the widely circulated demos/live tapes of 5 years previously, including ?Corpsegrinder?, a simple but effective track which featured on Death's first demo but was actually written by Rick and Kam. The album is a certified classic of the genre.

With line up intact, the band finally embarked on a punishing touring schedule to make up for lost time, visiting Europe with Texas' Devastation and Germany's Morgoth supporting. In 1992 the band recorded a follow up EP ?Inhuman Conditions? which included a rare guest appearance from Venom's Cronos on their cover of Warhead. More touring followed its release, with the band visiting Europe again in 1993,this time with Grave and Demolition Hammer in tow. On their return however the band effectively split up, the rhythm section of Bill and Terry were in demand to record for other groups and both now play in Six Feet Under.

In 1996 Kam and Rick regrouped to record a second album for Earache, recruiting drummer Syrus Peters and Pete Sison on bass to deliver ?Promise?. The album showcased a more varied metal style, still with the trademark guitar heaviness, but was poorly received by fans, though the inspired cover of Concrete Blonde's ?Bloodletting? is an undiscovered classic to this day. Soon after its release, the band folded once more.

3. Formed in Buenos Aires around 1985, Massacre was a Pioneer of Skate-Rock in Argentina.

Back From Beyond CD2

Back From Beyond CD1

Condemned To The Shadows (CDS)