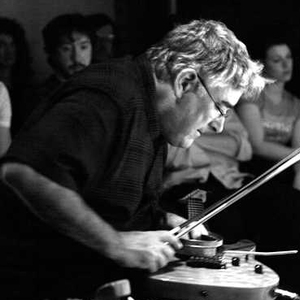 Death Ambient was a New York, United States experimental and ambient music trio comprising Kato Hideki (bass guitar), Ikue Mori (drum machines) and Fred Frith (guitar). The group was formed by Hideki and Mori in 1995 and recorded two albums, Death Ambient in 1995 and Synaesthesia in 1999. A third album, Drunken Forest with guest Jim Pugliese was released in 2007. Japanese bass guitarist Kato Hideki, and founding member of Ground Zero, moved to New York City in 1992 where he began working with a number of musicians, including John Zorn, Marc Ribot and Christian Marclay.

Japanese bass guitarist Kato Hideki, and founding member of Ground Zero, moved to New York City in 1992 where he began working with a number of musicians, including John Zorn, Marc Ribot and Christian Marclay. In 1995 he encountered and began collaborating with Japanese drummer and composer Ikue Mori. Mori had moved to New York City in 1977 and joined DNA as their drummer, without ever having played drums before. After DNA disbanded, Mori took to experimenting with drum machines which she modified to play samples. To enhance their sound, Hideki and Mori asked English experimental guitarist Fred Frith to join the group. Frith, founding member of Henry Cow, had lived in New York City for 14 years and collaborated with many of the experimental musicians there. According to Mori, the aim of Death Ambient was "...to create sounds and texture extravaganza and we invited Fred Frith to be a soul in it."

In 1997 American guitarist James Plotkin temporarily replaced Frith for a United Kingdom tour that included concerts in London and Stirling. The London concert was broadcast on BBC Radio 3's show, Mixing It.

Frith rejoined Death Ambient in 1998 and the trio gave a concert in Halle, Germany. It was the first time the original trio had performed together as a group. In June 1999 they returned to New York City to record their second album, Synaesthesia, using material from the concert in Germany. It was also released on Tzadik Records in 1999.

In May 2007, after six years in the making, a third album, Drunken Forest with guest percussionist Jim Pugliese was released, also in Tzadik's New Japan series. The trio (without Pugliese) performed the album live at John Zorn's not-for-profit experimental music performance space, The Stone on May 4 and 5, 2007.