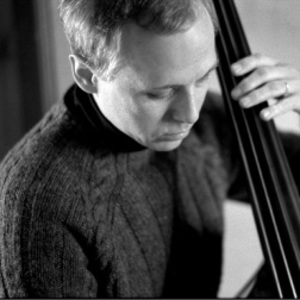 As a virtuoso bassist, versatile composer, and acclaimed bandleader, Marc Johnson has been a major innovator on the jazz scene for the past two decades. Born in Nebraska in 1953, Johnson took up bass at the age of 16, having already studied piano and cello. While completing his formal education in the celebrated music program at the University of North Texas, at age 19, Johnson began performing professionally with the Fort Worth Symphony. In 1977, he was on the road with the Woody Herman Band.

Born in Nebraska in 1953, Johnson took up bass at the age of 16, having already studied piano and cello. While completing his formal education in the celebrated music program at the University of North Texas, at age 19, Johnson began performing professionally with the Fort Worth Symphony. In 1977, he was on the road with the Woody Herman Band. A stop with Herman in New York City marked a major turning point for Johnson, where he was invited to sit in with Bill Evans at the Village Vanguard. In 1978, he joined Evans' trio, remaining with him until the pianist's death two years later. Johnson appears on numerous albums recorded with Evans, including the Grammy-winning We Will Meet Again and released in 1997, a six-CD box set of live recordings, Turn Out the Stars, weaving his distinctively warm tones and melodic lines into the complex harmonies of the Trio. ?I was still a very young player when I was with Bill,? Johnson says, ?but by playing with him night after night I matured a lot".

"My confidence grew, my ability to concentrate heightened, my sense of timing improved, and my knowledge of harmony expanded.? Over the past 20 years, Johnson has performed on more than 100 albums. Many have been with pianists, including Eliane Elias, Lyle Mays, and Enrico Pieranunzi, although Johnson has also recorded with saxophonists Stan Getz, Joe Lovano, and Michael Brecker, drummers Peter Erskine and Paul Motian, and Jack DeJohnette, vibist Gary Burton, and bandoneon master Dino Saluzzi. And many of his most notable recordings have been with guitarists. ?In 1984, when I first had an opportunity to do something on my own,? Johnson explains, ?I wanted to do something completely different from my previous association with Bill Evans, so as not to try to recreate the experience I had with that trio. When I was a kid, before I knew I was going to be a musician, I listened to all kinds of music, from the Beatles to Bob Dylan, Beethoven to Ravel, the Allman Brothers to Jimi Hendrix; I had rather eclectic taste. By the time I was seventeen, though, I was heavily into jazz, mainly Bill Evans and Miles Davis. Writing for a two guitar format brings together my earliest musical influences, my musical 'first loves'.? In addition to his long membership in guitarist John Abercrombie's trio, Johnson formed two guitar-oriented bands that rose to prominence in the late 1980s and early 1990s.

Bass Desires, with guitarists Bill Frisell and John Scofield, recorded two albums for ECM--a self-titled debut in 1986 and Second Sight in 1987; cut two trio albums for JMT--a self-titled disc in 1993 called Right Brain Patrol, initially with Ben Monder on guitar, later in 1995 with Wolfgang Muthspiel on guitar, an album titled Magic Labyrinth, both featuring Arto Tuncboyacian on percussion. Johnson also recorded an album of four duets, Two By Four (Emarcy) in 1991. On The Sound of Summer Running (on Verve records), his sixth recording as a leader, Johnson returned to the two-guitarist alignment inaugurated in Bass Desires. ?I wanted to continue that idea,? Johnson explains. ?Bill Frisell and I had played together, but neither of us had played with Pat Metheny, so this was a first. Joey Baron was a likely choice as the drummer because of his long association with Frisell and he's one of my favorite musicians.?

Swept Away (With Eliane Elias)

The Sound of Summer Running