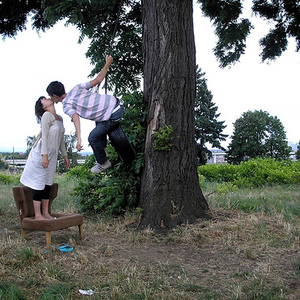 Lullatone is a popular music group based in Nagoya, Japan, whose music is characterized by an innocent, child-like quality and sparse, lo-fi sounds. Although the group refers to their style of music as "pajama-pop", it is commonly included in such musical subgenres as Twee pop, Indie pop and Electronica. It draws influence from such diverse sources as Bossa Nova, French pop music of the 1960s, children's songs and Musique concr?te.

Lullatone's founder was Shawn James Seymour, a native of Louisville, Kentucky. Its other principle member is Japanese native Yoshimi Tomida (Tomida Yoshimi, in traditional Japanese name order). Seymour began musical experimentation during his high school years in the late-1990s, using keyboards and cassette tape recorders. He and Tomida met while both were attending Bellarmine University; she as an exchange student from Japan. They soon became romantically involved and when Tomida's visa was due to expire, Seymour decided to return with her to Japan. In the small apartment they shared in Japan, Seymour began composing music late at night while Tomida slept. So as not to disturb her, the songs he created were lullabies. This was the origin of the name "Lullatone", which is also a reference to Raymond Scott's 1963 record "Soothing Sounds for Baby". Seymour and Tomida married in 2005.

With Seymour playing a variety of instruments, from the inexpensive Casio Casiotone SK1 sampling keyboard to the glockenspiel, melodica, recorders and other compact and simple instruments, and Tomida providing the vocals in both Japanese and English, they recorded their first album in 2003, titled "Computer Recital" (on the AudioDregs subsidiary of Darla Records). The record was immediately greeted with critical acclaim, garnering considerable attention and reviews from music magazines and influential independent music blogs such as Pitchfork Media. Lullatone followed "Computer Recital" with "My Petit Melodies" on Japan's Childisk Records, "Little Songs about Raindrops" in 2005, "Plays Pajama Pop Pour Vous" in 2006 (both on AudioDregs), and a self-produced tour EP in 2007 to celebrate their first US tour.