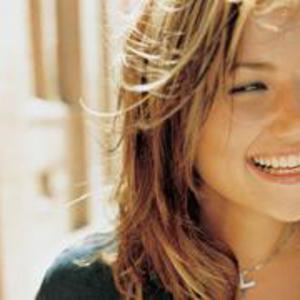 Lucy Woodward (born October 27, 1977, in London, England) is a singer-songwriter who had a hit in February 2003 with Dumb Girls. In 2005 she won a BMI Pop Award for writing Stacie Orrico's single More to Life. Lucy has released 3 studio albums, "While You Can" (2003), "Lucy Woodward Is...Hot & Bothered" (2007) and "Hooked!" (2010). Lucy was born in London, but was raised in Amsterdam and New York City. She has a very musical background: her British father is a composer and conductor and her New Yorker mother is a musicologist and an opera singer.

Lucy was born in London, but was raised in Amsterdam and New York City. She has a very musical background: her British father is a composer and conductor and her New Yorker mother is a musicologist and an opera singer.

Raised on classical and Middle-Eastern music, Lucy studied piano and flute before asking for singing lessons at age 12. She attended a Bronx high school renowned for its music department and made her first recordings singing house music in her friends' basements. She spent part of each summer in music camp and part in Holland, where she frequently locked herself up in her father's studio and listened to jazz and old R&B records. At 16 she was accepted into the Manhattan School of Music to study jazz, but after a year decided to learn her songwriting and performing skills on her own. She spent the next few years performing in swing-organ trios, working as a session singer, waiting tables, and singing jazz standards in Greenwich Village restaurants. She started off singing in jazz cafes and singing for tips or dinner. "You sing with a piano player and a tip jar on top of the piano." She said in an interveiw on NZGirl.

In 2003 Lucy signed with Atlantic Records and recorded her debut album While You Can, out of which came the Top 40 hit ?Dumb Girls,? produced by Kevin Kadish; other songs on the record were produced by John Shanks at Jim Henson Studios. Although her efforts won her some mainstream notoriety, making slick, radio-ready pop proved artistically unsatisfying for her.

The following year, Lucy was asked by producer friend Jaime Houston to record a version of the big-band tune "It's Oh So Quiet" for the Disney film Ice Princess. The song had originally been recorded by Betty Hutton in 1948 and was subsequently popularized by Bj?rk. Lucy credits it as being a major creative turning point for her, one that inspired much of the writing in her second album.

Lucy began her musical reinvention on her second album, the independently released Lucy Woodward Is... Hot and Bothered (2007), a transitional effort that incorporated R&B grooves and electronic beats, while mining deep-rooted jazz influences. Hot and Bothered was produced by longtime collaborator Itaal Shur and Tim K. . Barnes & Noble named her ?Artist of the Month? for August 2008. Released in 2007 on Atlantic, it was initially only available through iTunes, on July 29, 2008 getting a physical release exclusively through Barnes & Noble.

Lucy's third album, Hooked!, was recorded at Stratosphere Sound in New York and Jim Henson Studios in Hollywood and released on Verve Records in 2010. It was largely produced by Tony Visconti (David Bowie, T-Rex), but included contributions by Justin Stanley (Nikka Costa, Sheryl Crow), Itaal Shur and Tim K. Lucy penned much of the record with songwriters Dan Petty and Michelle Lewis, claiming she had been inspired by the music of Peggy Lee and Django Reinhardt. One song on the album, ?Another Woman,? was written for her by longtime inspiration Nellie McKay (also Verve), who is also featured on background vocals.

In 2011, Lucy was asked to tour with Pink Martini after the band's singer China Forbes had to undergo vocal surgery. Her quick study of Pink Martini's repertoire of Croatian, Japanese, French, English and Turkish songs did not go unnoticed in the music press. She toured cross-continent with the band for a number of concerts the same year, including performances at the Toronto and Montreal jazz festivals and Ravinia, as well as a three-night stint with the San Francisco Symphony (Donato Cabrera conducting).

Til They Bang On The Door