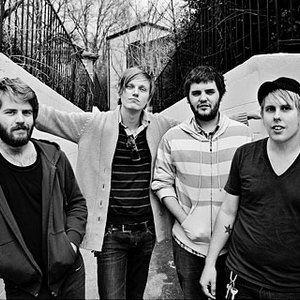 The humble beginnings of Tallahassee indie rock outfit Look Mexico can be traced to a chance meeting between Matt Agrella (vocals/guitar) and Dave Bumsted (guitar) at a Sea and Cake show held at Florida State University. They started writing songs, and in early 2004 decided to really get a band up and running together. Searching for members to round them out, they eventually hooked up with drummer Josh Mikel; Look Mexico booked their first show in October 2004 (playing with Karate, no less), even though they had yet to find a bassist.

A temporary one was found just in time for the gig, but Look Mexico weren't solidified until after the recording of their first EP, 2005's So Byzantine, with the addition of Tyson Kuhlhoff.

The guys played various dates, mostly around Florida, before entering the studio in early 2006 to record their next effort. The Crucial EP was released later that year to positive response, and following its recording, Bumsted left to pursue school and was replaced on guitar by Ryan Slate. Over time, the band shared stages with acts like Horse the Band, Piebald, Gogogo Airheart, Fake Problems, and more. Look Mexico signed to Lujo Records in late 2006 and readied their debut full-length, This is Animal Music, which appeared the following summer. The band supported it on the road for the remainder of the year.


To Bed To Battle was written and recorded this past summer in Look Mexico's former hometown of Tallahassee, FL. With the converted basement of a local pizza shop dedicated as their studio space, the band was able to take their time throughout the recording process, experimenting with and expanding their sound, and adding new instrumentation such as electric piano, organ, pedal steel, violin, cello, and horns. The resulting album - which deals with struggle and pressing on in the face of adversity - is an incredibly catchy, diverse yet cohesive set of ten songs. To Bed To Battle ranges musically from anthemic pop/rock and explosive ballads ("You Stay. I Go. No Following," "Until The Lights Burn Out?"), to alternately edgy and dreamy math-rock ("No Wonder I'm Still Awake," "Time For You To Go Do Your Own Thing"), to blistering, barreling modern rock ("I Live My Life A Quarter Mile At A Time," "They Offered Me A Deal (I Said No, Naturally"), and even acoustic, chamber pop-laced Americana ("Take It Upstairs, Einstein").

Track listing for To Bed To Battle:

To Bed To Battle

This Is Animal Music