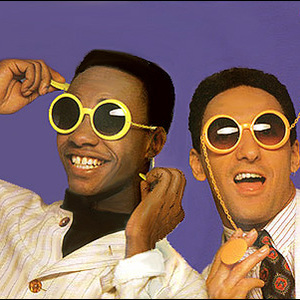 The London Boys were a German-based, British dance pop duo comprising of Edem Ephraim (born 1 July 1959 in London) and Dennis Fuller (born 19 June 1960 in Jamaica), both of whom were killed in an Alpine car accident on January 21, 1996 . Although they lived near Hamburg, Germany since 1981, they had actually met when they were at school in London. They were formed in 1986 as a vehicle for songwriter and producer - Ralf-Ren? Mau?.

Although they lived near Hamburg, Germany since 1981, they had actually met when they were at school in London. They were formed in 1986 as a vehicle for songwriter and producer - Ralf-Ren? Mau?. Their musical style was catchy and highly infectious Eurobeat dance music combined with choreography acquired during their experience as Rollerblade dancers prior to forming London Boys. Consequently their early releases were marketed towards the Eurodisco scene.

They are remembered mainly for singles from their classic 1989 album The Twelve Commandments Of Dance, which peaked at No.2 on the UK charts. Most notable of these songs were London Nights, which peaked at No.2, and Requiem, which reached No.4 and was their breakthrough chart entry in April 1989. Another single, a remixed version of their 1987 release Harlem Desire, reached No.17. The music videos for these singles were largely based around impressive dance sequences and relationship/love storylines. Unfortunately The Twelve Commandments Of Dance is now out of print and the band have been somewhat forgotten, but the album has since become a collectible and their music still holds up well today.

Their second album "Sweet Soul Music" was released in 1991 and the 3rd album "Love 4 Unity" in 1993. The 4th album "Hallelujah Hits" was released in 1995. This album was relased under the name of "The New London Boys" and it was a combination of religious music and eurobeat dance music.