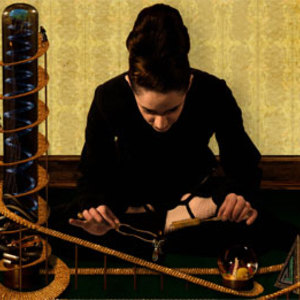 Leila Arab, musician, producer, recording artist, moved to London after the 1979 Islamic Revolution in Iran. She started recording for Rephlex Records her own style of heavily IDM-influenced soul/ambient music. Described by DJ Gilles Peterson as 'the best of what Britain has to offer in the cutting edge of music', composer/producer Leila has collaborated and toured live with Bjork, been featured on Plaid 's Not For Threes debut, and remixed the likes of Acacia under her experimental Gramatix alter-ego.

On the title track of her debut release, the Don't Fall Asleep EP, an eerie treated voice was juxtaposed against corrupted funk. Her debut album was recorded in her bedroom and issued on Rephlex Records in 1998. Drawing on techno, funk, soul, electronica, hip-hop and classical, Like Weather was created in the same arbitrary way that most people buy and listen to music - that is, with little sense of genre boundaries. At one point, the album was actually rumoured to be a lost Prince recording. The album Like Weather is a widely respected milestone and defines a period of London urban music.

As if to accentuate her sonic perversity, Leila issued (to friends and journalists) a cover of 'Heaven On Their Minds' from the musical Jesus Christ Superstar backed by a corrupted version of 'Won't You Be My Baby' - ... a track from Like Weather that had been mooted as a potential hit single. The track was not, however, given a full release because of potential copyright problems.

At the beginning of 1999, Leila relocated to XL Records. On 'Sodastream', her inaugural single for the label, she confirmed her reputation as 'part sonic terrorist, part harmonic evangelist' by disrupting a pop song with dysfunctional noise and distortion. Her debut album for the label, Courtesy Of Choice, was another highly eclectic collection that further established Leila as one of the most inventive artists on the contemporary music scene.

Her third album, ?Blood Looms and Blooms?, was released on July 7, and was preceded by two EPs, ?Deflect? featuring Martina Topley-Bird, and ?Mettle?, featuring Luca Santucci. The full album features collaborations with both Martina and Luca, as well as Terry Hall, sister Roya Arab, and various others. The album is heralded to be 'one of 2008's best leftfield albums'.

Heaven On Their Minds (With Luca Santucci) (EP)