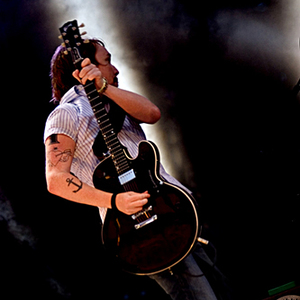 Lars Winnerb?ck is one of the most popular Swedish singers/songwriters of the last decade. He started off with a folk-pop sound but moved towards rock in the late 90's. In his most recent work he has again moved towards a more acoustic style. Originally from Link?ping, he later moved to Stockholm to help his career take off. Both cities are frequently featured in the lyrics of his songs. And a little bit more description from Wikipedia:

And a little bit more description from Wikipedia:

Lars Mattias Winnerb?ck (born October 19, 1975), often called Lasse, is a Swedish singer and songwriter. He was born in Stockholm but spent his childhood in Link?ping, where he attended Katedralskolan, before moving back to Stockholm in 1996, the same year releasing his first album, Dans med sv?ra steg ("Dance With Difficult Steps"). He is now one of Sweden's most popular artists.

The influence of songwriters like Carl Michael Bellman, Evert Taube and Cornelis Vreeswijk shines through in Winnerb?ck's exclusively Swedish lyrics, which attack everyday shallowness, prejudice in society and hypocrisy in religion, as well as dealing with romance, relations and anxiety. Several songs depict the difference between living in medium-size Link?ping and metropolitan Stockholm.