Billie The Vision & The Dancers 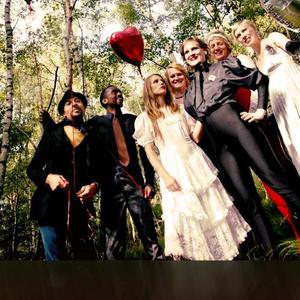 At first impression the indie pop ensemble, Billie the Vision & the Dancers might seem as yet another pop band with no apparent worries. But if you were to dig a little deeper, you would soon discover that they're not always about expressing joy, happiness and dancing. What is more, their music actually manages to transcend generation gaps. Billie, moreover, is not a person per se, but rather represents the inherent quality the band wants to encourage their listeners to find within themselves.

Billie is about not being afraid of being naive, pretentious or corny, to be proud of what you are and have the guts to say, "Meet us there at the Nobel Square if you wanna change the world with us".

Billie the Vision & the Dancers got together in Malm? during the recordings of the first album in the spring of 2004. The Singer, Songwriter Lars Lindquists had previous material from a solo project. One person wasn't enough he thought, and had persuaded five more members to join the project. Most of them old friends from his home town Br?kne-Hoby in Blekinge, and on top of that a new friend from Borl?nge.

The debut I Was So Unpopular in School and Now They're Giving Me This Beautiful Bicycle released on their own label Love Will Pay the Bills got great reviews in the press and also got nominated at Manifest, the Swedish prize award for records released on indie labels.

2005 saw the release of The World According To Pablo and in 2007 "Where The Ocean Meets My Hand" was released.
"I Used To Wander These Streets" was released on June 4th 2008.
All albums are available for download at the band's website for any amount of donation - or none.

For more information on the band, visit the
official website at www.billiethevision.com or
www.myspace.com/billiethevisionandthedancers

While You Were Asleep

From Burning Hell To Smile And Laughter

I Used To Wander These Streets

Where The Ocean Meets My Hand

The World According To Pablo