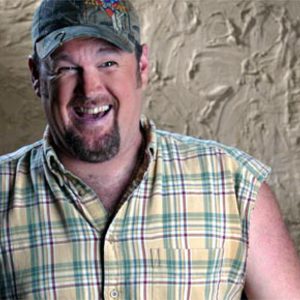 Daniel Lawrence Whitney (born February 17, 1963 in Pawnee City, Nebraska), better known by the stage name Larry the Cable Guy, is an American stand-up comedian and one of the co-stars of the Blue Collar Comedy Tour and the subsequent series Blue Collar TV. He starred in the feature-length movie Larry the Cable Guy: Health Inspector, and also stared alongside close friend Bill Engvall in the film Delta Farce.

He starred in the feature-length movie Larry the Cable Guy: Health Inspector, and also stared alongside close friend Bill Engvall in the film Delta Farce.

He started in Tampa Bay followed by stints at Rock 100 WDIZ and 101.1 WJRR Orlando before hooking up with the Blue Collar Boys. He became known in the South in the early '90s when he made regular guest radio appearances on programs such as the Ron and Ron Show. He was also a regular during the late 1990s on 101.9 The Edge in Omaha, Nebraska on Friday mornings when he would call into Chris Baker's morning show. "Larry"'s trademarks are "redneck"-style humor delivered while speaking in an affected thick Southern dialect, recounting bizarre stories about his "family," and the using the phrase "Git-R-Done!"

Often during his acts, a woman in the audience yells out that she loves him. He usually responds by saying, "I told you to wait in the truck" - a line cribbed from Tom Waits. He also sings Christmas songs like "Donny the Retard," "Titty Bar Christmas," and "I Pissed My Pants". He uses analogies like "Madder than a skinhead watching the Jeffersons," "Madder than a car load of queers getting pulled over for doin a 69 in a 55".

In 2005, he was featured in Gretchen Wilson's music video for the song "All Jacked Up," playing dual roles as himself and a transvestite bar patron. In 2006, he starred in the film Larry the Cable Guy: Health Inspector and was the voice of Mater the tow truck in Disney/Pixar's animated film Cars.

Whitney has also seen considerable success from his comedic recordings. His comedy albums Lord, I Apologize, released in 2001, and The Right To Bare Arms, released in 2005, have both been certified gold by the RIAA.

The Right To Bare Arms