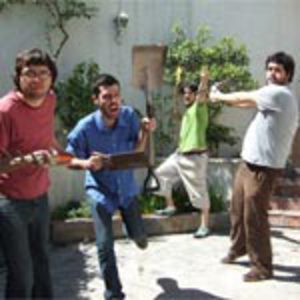 Album , the eclectic electronic rock quartet formed in Monterrey, Mexico in 2002, has released four independent albums: ?Eureka s?n? (2003), ?Microbricolages? (2006), "Album Vs. Monterrey" (2007) and "Cancer Baby" (2008). These four albums have been amazingly well received by the critics not only in the Mexican Independent scene, but also internationally. Album?s live act at Austin, TX?s South by Southwest Music Festival was described by the New York Times as: ?a galvanizing late night set, Album merged rippling electronic loops and effects with fierce garage-rock rave-ups?.

The experience Album has gathered while touring in Mexico has allowed them to deliver intense, organic performances of the trademark electro-rock sound displayed in their albums.

Their debut album ?Eureka s?n? has been dubbed ?Mexico?s OK Computer or Paul?s Boutique, maybe both? by Time Out New York, and was awarded UM?s Album of the Year in 2004.

Album?s sophomore release ?Microbricolages? is already receiving praises from the critics and getting constant airplay in college and rock radio stations. Time Out New York called it ?an hour-long barrage of brief, densely constructed gems?none of which sound Mexican in any conventional sense. But the group's confident, polished appropriation of pop detritus from everywhere and everywhen assures that Microbricolages loses nothing in translation.?

Full exploitation of new media possibilities in all stages of their work has always been part of Album?s means and purpose. Technological progress has considerably downsized the logistic implications of producing, promoting, and distributing a musical project. The consumers have changed, so have the musicians. The Industry doesn?t know what it?s selling anymore. Album is amongst those who believe the Industry needs to reinvent itself in order to find a business model more suitable for this new reality. And they?d like you to join them in discovering what that is.

If you are curious about Album and/or their work. Don?t miss the chance to review the music yourself, visit their webpage www.somosalbum.com . Come on, now. You have nothing to loose, it?s free! What, are you chicken?

Album started rocking in the early 00?s. That?s the truth. When I say this to my otherwise well informed fellow ?not-quite-famous-but-critically-acclaimed-indie-band-bio-writers? (we have an office), they stare at me in either horror, dismay or disgust, or some combination thereof. There are many stories and sides to it, but of course, the fact is that I have looked it up in H.J.R. Murray. I have also looked it up in the sources which he cites. This is not an easy task, as the aging pages crumble in my finger tips, but it is not too difficult either, because I believe in me.