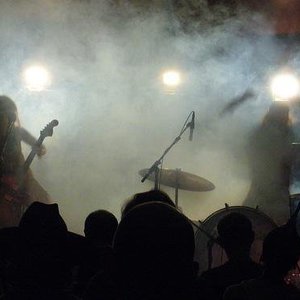 Jucifer, founded in Georgia in 1993, are pioneers of the sludge / doom metal two-piece. They are notorious for their use of massive amplification, and for their entirely nomadic lifestyle since moving into their tour vehicle a decade ago. Early on, Jucifer shared stages with many underground legends, including Lubricated Goat, Bloodloss (Mark Arm/Mudhoney), Melt-Banana, Melvins and Eyehategod. Years based in Athens, Georgia...

Early on, Jucifer shared stages with many underground legends, including Lubricated Goat, Bloodloss (Mark Arm/Mudhoney), Melt-Banana, Melvins and Eyehategod. Years based in Athens, Georgia, United States from 1991 until 2001 were pivotal both for Jucifer and the Southern scene itself, which has evolved to strongly reflect bands such as Jucifer and contemporaries Harvey Milk.

Early Jucifer performances were best categorized as doom or drone, relying on ultra-low tunings and plodding tempos at chest-caving volumes. Although there were always some faster grind parts during Jucifer's sets (i.e. Fall of the Bastille and Queen B, both played often throughout the 90's) the turn of the century saw the band begin to incorporate more speed. In 2008 guitarist Gazelle Amber Valentine began tuning much higher than ever before, and has said this was done to support audibility of notes at faster tempos. Current sets incorporate elements of doom, drone, sludge, black, grind, and hardcore.

While Jucifer's live performance has always been a brutal, bludgeoning exercise in high volume riff worship accompanied by massive and maniacal drumming by Edgar Livengood, their studio work extends far beyond that aesthetic. Both members may augment recordings with unexpected instrumentation (cello, violin, banjo, piano) and much softer, more pop inflected songs than would ever be heard at a show. Valentine's vocals in the live setting are primarily growls and gut-wrenching screams, but on albums she stretches out into beautiful harmonies and intimate solo vocals.

Jucifer has spent the better part of seventeen years on the road. Homeless since 2001, they tour all year. Their latest release is the album Throned In Blood released in April 2010, Nomadic Fortress.

I Name You Destroyer

Calling All Cars On The Vegas Strip