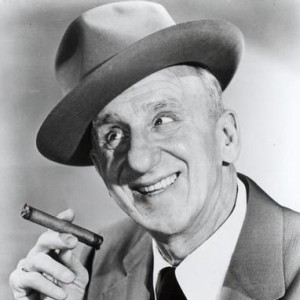 James Francis Durante, better known as Jimmy Durante or Schnozzle (Snozzle) Durante, (February 10, 1893 ? January 29, 1980) was an American singer, pianist, comedian and actor, whose distinctive gravel delivery, comic language butchery, jazz-influenced songs, and large nose ? his frequent jokes about it included a frequent self-reference that became his nickname: "Schnozzola" ? helped make him one of America's most familiar and popular personalities of the 1920s through the 1970s.

He was also one of the most beloved people within the entertainment industry: an acquaintance once remarked of Durante, "You could warm your hands on this man."

Durante was born in New York City, the third of four children born to Mitch Durante (1855 ?1929) and Margaret Durante (1858?1936). A product of working-class New York, Durante dropped out of school in the eighth grade to become a full-time ragtime pianist, working the city circuit and earning the nickname "Ragtime Jimmy," before he joined one of the first recognizable jazz bands in New York, the Original New Orleans Jazz Band. Durante was the only member of the group who didn't hail from New Orleans. His routine of breaking into a song to deliver a joke, with band or orchestra chord punctuation after each line became a Durante trademark. In 1920, the group was renamed Jimmy Durante's Jazz Band.

Durante became a vaudeville star and radio attraction by the mid-1920s, with a music and comedy trio called Clayton, Jackson and Durante. (Lou Clayton and Eddie Jackson, probably Durante's closest friends, often reunited with Durante professionally.) By 1934, he had a major record hit, his own novelty composition "Inka Dinka Doo," and it became his signature song for practically the rest of his life. A year later, Durante starred in the Billy Rose stage musical, Jumbo, in which a police officer stopped him while leading a live elephant and asked him, "What are you doing with that elephant?" Durante's reply, "What elephant?", was a regular show-stopper.

He began appearing in motion pictures at about the same time, beginning with a comedy series pairing him with silent film legend Buster Keaton and continuing with such offerings as The Wet Parade (1932), The Man Who Came to Dinner (1942, playing Banjo, a character based on Harpo Marx), Ziegfeld Follies (1946), Billy Rose's Jumbo (1962, based on the 1935 musical) and It's a Mad, Mad, Mad, Mad World (1963).

As Time Goes By: The Best Of Jimmy Durante