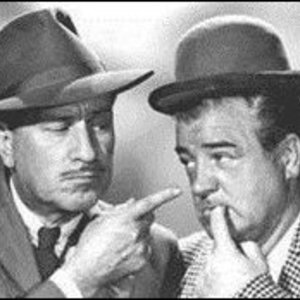 From Wikipedia, the free encyclopedia Abbott and Costello (William (Bud) Abbott, 1897-1974); Louis Costello, 1906-1959), American comedy duo whose work in radio, film, and television made them one of the most popular and respected teams in comedy history. The two comedians first worked together in 1935 at the Eltinge burlesque theater on 42nd Street in New York. Costello became a comic after failing as a movie stunt double and extra; Abbott had been in burlesque since 1916, as a cashier, producer, and finally a performer.

Abbott and Costello (William (Bud) Abbott, 1897-1974); Louis Costello, 1906-1959), American comedy duo whose work in radio, film, and television made them one of the most popular and respected teams in comedy history.

The two comedians first worked together in 1935 at the Eltinge burlesque theater on 42nd Street in New York. Costello became a comic after failing as a movie stunt double and extra; Abbott had been in burlesque since 1916, as a cashier, producer, and finally a performer. They made their partnership formal in 1936, building an act by adapting and improving numerous old burlesque sketches into their own style. Abbott was the arch, often scheming straight man and Costello the confused, context-challenged naif.

They received their first national exposure in 1938, when they appeared on radio's The Kate Smith Hour. Their popularity on the program grew, and they stayed on as regulars for two years. This led to roles in a Broadway musical, "The Streets of Paris," in 1939. In 1940 they were signed by Universal for the film One Night in the Tropics. Cast strictly in a supporting capacity, they nonetheless stole the show with several classic routines, including their immortal "Who's on First?" Universal signed them to a long term contract and their second film, "Buck Privates," 1941 secured their place as movie stars. The duo made over 30 films between 1940 and 1956 (see list below) and were among the most popular and highest-paid entertainers in the world during World War II.

The team appeared on radio throughout the 1940s. They hosted a summer replacement series for Fred Allen on NBC in 1940, then joined Edgar Bergen and Charlie McCarthy on the Chase and Sanborn program in 1941. During the same period two of their films, "Buck Privates" and "Hold That Ghost," were adapted for radio and presented on Lux Radio Theater. On October 8, 1942 the team launched their own weekly show on NBC sponsored by Camel cigarettes. They moved to ABC (the former NBC Blue Network) from 1947-49.

By 1951, the twosome had moved to television---first as one of the rotating hosts of The Colgate Comedy Hour (Eddie Cantor and Bob Hope were among the others) and then, the following year, in their own situation comedy, The Abbott and Costello Show. The half-hour series was loosely adapted from their radio show, but cast the duo as unemployed wastrels. One of the show's running gags involved Abbott perpetually nagging Costello to get a job to pay their rent, while Abbott barely lifting a finger himself in that direction. The show featured Sidney Fields as their landlord and Hillary Brooke as a friendly neighbor who sometimes got involved in the pair's schemes. Another semi-regular was Joe Besser, who played Stinky, a 40-year-old sissy dressed in a Little Lord Fauntleroy suit. The Abbott and Costello Show ran from 1952 to 1954, but the show found a new life in syndicated rerun broadcast in the late 1960s and early-to-mid 1970s, and the episodes were probably seen by more viewers this time around than when the show was actually produced.

In the 1950s, Abbott and Costello wore out their welcome. They released two new films per year, while some of their earlier films were re-released. Add to that a weekly TV series and the occasional live appearance on the Colgate program, and the team's bag of tricks was overexposed. Then, with the ascendancy of Martin and Lewis, Bud and Lou found their popularity waning. Conflicts between the two began to divide them, and the tax man finished the job: Abbott and Costello split up in 1957 after the Internal Revenue Service hit them for back taxes enough that both were forced to sell many assets, including their rights in their films. Two years later, after making his lone solo film (Thirty Foot Bride of Candy Rock), Lou Costello died.

Bud Abbott---who voiced his character in a mid-1960s Hanna-Barbera cartoon series of Abbott and Costello---died in 1974.

Their famous comedy routine, "Who's on First?" is believed to be available in as many as twenty versions; Abbott and Costello performed subtle variations of the routine in film, on their radio show, and on television (in one of their Colgate Comedy Hour installments). It became such an icon of American comedy that the duo and their writers seized on any opportunity to craft different routines based upon the same hook. Perhaps the most successful of the children "Who's on First?" spawned was "U Drive," a routine about renting a car, which debuted on their radio show.