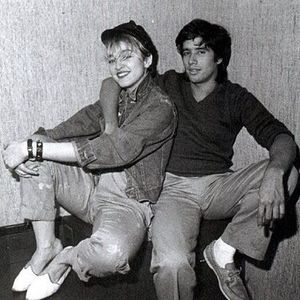 John 'Jellybean' Benitez (not to be confused with Jelly Bean who is an artist in his own right: http://jellybean.dmusic.com/) is revered in the dance music community as one of the greatest club DJs bar none. To earn such a title, a genius for rapport with the club audience is required. Jellybean has utilized this particular genius to build a brilliant career that ranges across all aspects of Dance music including club and radio DJ, artist, producer, mixer, songwriter, and record label executive.

Born in 1959, John Benitez, already nicknamed Jellybean by his sister, Debbie, set foot inside Manhattan's Sanctuary club, and a yearning to mix dance music was born. Jellybean immersed himself in the burgeoning disco scene of the mid-70's and was soon in demand as DJ at legendary clubs including New York, New York, Studio 54 and Xenon. In 1981 Jellybean gained a residency at the FunHouse that would last for the next three years. The FunHouse became a key venue for the development of Dance music known as Latin Freestyle. The live DJ shows and a weekend gig mixing Dance music for New York radio station WKTU built a tremendous reputation for Jellybean in the Dance community.

From live work, it was natural for Jellybean to move into studio mixing and eventually production work. One of his early remix projects, the Arthur Baker-produced Walking On Sunshine by Rocker's Revenge, topped the national Dance charts in 1982. This began an incredible run of 7 years in which Jellybean mixed or produced at least one number one Dance hit each year.

Through his work at the FunHouse, Jellybean met a regular dancer and aspiring singer, Madonna Ciccone. She recruited him to produce a final track, Holiday, for her first album and do remix chores for Lucky Star and Burning Up. The results topped the Dance chart in 1983 and studio partnerships as well as a romance were born. Jellybean's other 1983 projects bore fruit in number one Dance hits for Hall and Oates, the Romantics, and Irene Cara. Remixing work on Flashdance tracks was one of Jellybean's first assignment for film music. His success led to extensive work over the next decade on producing film soundtracks as well as remixing individual songs for the clubs.

In 1984, the Wotupski?! EP marked Jellybean's debut as a recording artist. His reworking of the group Babe Ruth's early 70's recording The Mexican topped the dance chart as did its follow-up Sidewalk Talk, written by Madonna. The romance and studio collaboration with Madonna ended in 1985 after Jellybean proved he could produce stunning pop ballads for Madonna (Crazy For You) as well as incendiary dance cuts. Not long after the end of his work with Madonna, Jellybean went to work on tracks by a new pop music diva, Whitney Houston. Jellybean's work with Whitney Houston would result in two more number one dance tracks, So Emotional and Love Will Save the Day and a top 3 hit, How Will I Know?.

Jellybean's first full-length album Just Visiting This Planet was released in 1987 and included two hits that made the top 3, Who Found Who and The Real Thing. A second album, Jellybean Rocks the House appeared in 1988 and a third, Spillin' the Beans in 1991. All included top 5 Dance hits. By the early 1990's, Jellybean's production and remix work slowed as he became more involved in other aspects of his career. This included film soundtrack work and encouragement of new artists.

In 1995, Jellybean co-founded H.O.L.A. (Home of Latino Artists) Recordings as a unique project to develop mainstream Pop, R&B, and Hip Hop music by bilingual artists for simultaneous release in English and Spanish language markets. This project has borne fruit in a number of musical genres. Jellybean also heads Jellybean Recordings, which has released a number of major Dance hits including The Lover That You Are by PULSE with Antoinette Roberson and Think It Over by Jennifer Holliday. Jellybean's music publishing venture, JB Music Publishing, has published the music of such major artists as Mary J. Blige, LL Cool J, and BoyzIIMen. In 2000 Jellybean amply demonstrated his mixing skills are fully intact as he mixed the album Jellybean's House Party featuring hits from his record label such as Soul Solution's All Around the World and Johnny Vicious' Move Your Body.