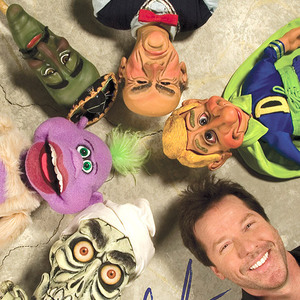 Jeff Dunham is a ventriloquist and stand-up comedian. He has performed on numerous comedy shows including Comedy Central Presents in 2003. Some of his usual puppets include a woozle named Peanut, a bitter old man named Walter, and Jos? Jalape?o - a talking jalape?o pepper on a stick. His latest DVD, Jeff Dunham: Arguing With Myself, was released in April 2006. In this stand-up offering, Jeff opens his show playing straight-man to his usual crew and includes four recently added characters. Sweet Daddy D, Bubba J, Melvin the Superhero Guy, and Achmed the Dead Terrorist.

Peanut is a purple woozle with purple fur, a small tuft of green hair on his head (which, according to Dunham, are Ostrich feathers), and only one shoe. Unlike most of Jeff Dunham's puppets, his eyes and eyebrows are immobile. This allows for a greater range of motion for his head. Peanut also has a rod attached to his left elbow which Jeff uses to operate and further the range of the puppet's movement.

According to his fictional biography, Peanut was born on an island in Micronesia in the Pacific Ocean near Guam and has five siblings (Eeny, Meeny, Miny and Fred). He never finished school. He moved to the United States in 1986. According to the official website, he met Jeff Dunham in central Texas, but according to Arguing With Myself, they met in Florida.

There is a special feature on the DVD showing Jeff Dunham's pet chihuahua humping the puppet. There is also an outtake where Peanut's green tuft of hair accidentally came out. Noticing a member in the audience who is also bald, Jeff hops offstage with Peanut and has Peanut hug the man and rub his head, jokingly "feeling his pain" so apparently, the nose is Velcroed on.

One of Peanut's trademarks is when he swings his hand over his head and says "Neeow!", talking about joke going over someone's head.

Walter is a retired and grumpy old man with arms always crossed in discontent. Married 46 years, he has a brash, negative, and often sarcastic view on today's world. He is a Vietnam War veteran, and "doesn't give a damn" about anyone; even his own wife.

Demonstrating improvisational comedy, Jeff sometimes does a segment at the end of Walter's routine in which Walter answers questions that the audience were asked to provide prior to the show.

To express Walter's utter "intolerant-of-everyone" nature, the DVD features a scene just before the Q&A segment where an audience member (named Mike) leaves to the restroom. In a huff, Walter unleashes insults at him until he returns, often simply referring to him as a dumbass. In the commentary track, Jeff describes that the stage lighting limits his ability to really see the audience and he could only see that someone was walking. As he talked to Mike's wife, he realized that Mike was a friend of his. Also on the DVD is an outtake with Walter which shows the puppet's arms falling uncrossed and limp at the sides. If that weren't enough, Jeff then forgets his place when he reconfigures Walter's arms. He admits to being slightly intoxicated on tequila at the time (a shot provided by friend Mike between shows), but somehow still maintains the laughter until he finds his place again.

Walter has also met many celebrities along with Jeff, such as Willie Nelson (who he is a fan of) and Jay Leno, and has appeared with Jeff on the Best Damn Sports Show Period, where he described his performance as "I got the brothers laughin and the crackers pissed".

Jose Jalape?o (on a stick)

Jose is a jalape?o pepper with a latino personality, a sombrero, and a mustache, whose running joke is adding "on a stick" to the end of most of his sentences. Jose's movement is restricted to one single motion of the mouth which Jeff operates by using his thumb on the back of Jose's infamous stick. Although hindered from doing much else, Jose makes up for his mobility loss with his characteristics, his singing ability, and most of all, his stick. He lives in a plain pine box, one of Jeff's original character storage trunks. Jose is usually brought out during Peanut's act and the two often get into an argument, with Jeff in the middle of it all. Jose has clarified that he is not Mexican but Cuban, and that he hails from Florida, although he once said that he's Puerto Rican and from New York City. Peanut has also given many humorous theories as to the stick, such as Jose mooning a javelin thrower or a freak pogo accident.

On Dunham's official site, On a Stick, it is revealed that Jose was in fact from Mexico and was part of a family of Jumping Jalapenos, and his act involved a pogo stick. He was practicing one day, slipped, and the pogo stick pierced his underside. Close to his heart, the pogo stick could not be removed safely, so they cut off the spring part, giving him his famous 'stick.'

Bubba J. is one of Jeff's latest characters. He loves beer and NASCAR. The "J." is short for his last name, Junior, he is married, and is assumed to have at least one child. Odd as his characteristically redneck attitude is, what is even weirder is that the dummy can move just his left eye from center to left. Bears a notable resemblance to Mortimer Snerd.

He met his wife at the family reunion. After a while, her daddy proposed for him. They had the reception at Walmart, because "its easier to return da gifts". They were greeted by Walter.

Another new character in Jeff's arsenal, Sweet Daddy D is Jeff's "new manager" and is trying to school Jeff in street, often with much difficulty, to no avail, and with much dismay at Jeff's lack of knowledge of black slang. Sweet Daddy Dee wears a purple pimp suit and is bald underneath his removable hat. The dummy has movable eyes and eyebrows and can pull his upper lip back.

Melvin is an older character of Jeff's who isn't included in the DVD but does show up on the Comedy Central Presents episode. Albeit he has no real powers, he claims he'd be more of a superhero if it weren't for his large nose and small stature. He claims his arch nemesis is his wife, but only at certain times of the month when she "turns evil."

His costume is blue and yellow, with a D on it. He bought it on an online auction, and the highest bidder appears to be the only person that he's ever defeated. He doesn't know what the D stands for, but claims it to be his theme song (a musical "Du-du-du!"). However, Walter says the D stands for dumbass (and says that his theme song should be "du-du-DUMBASS!").

Achmed is a skeleton-looking character that made a surprising appearance on Jeff's show during one of his comedy club tours in 2006. Achmed apparently martyred himself in the course of a suicide bombing, but lives on as a skeleton with facial hair. He apparently has problems keeping his feet on the stand and keeps shouting "Foot! Foot! Foot!" to Jeff to keep his feet up. He has a white bandana that he says was made from boxers. He also shouts "I'll kill you" or "Silence!" to people who make fun of him.

Actually Peanut's puppet (and scaled so), Mini Jeff is a small puppet that resembles Jeff down to the brown tie he was wearing at the time. Mini Jeff is rude and interrupting, but puts the 'On a stick' phrase at the end of Jose's sentences when he forgets to. The only real physical difference between Jeff and Mini Jeff is that Mini Jeff's voice is deeper. Jeff can control Peanut and Mini Jeff simultaneously with the same hand, ultimately making his capacity for puppets up to three.