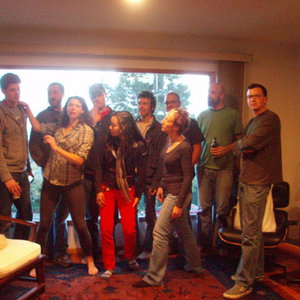 The Industrial Jazz Group (IJG) is an acoustic "new jazz" ensemble showcasing the music of American composer Andrew Durkin. Formed in Los Angeles as a quintet in 2000, the IJG has grown in size and scope with each of its five albums (the sixth album will be released in early 2009). The group currently consists of sixteen musicians: eleven horns (five brass and six reeds), three rhythm section players (bass, drums, piano), and two singers.

Although based on the (US) west coast, the group has also attracted players throughout the US and in Europe. Past and present members include Kris Tiner (trumpet), Evan Francis (alto sax, flute), Jill Knapp (vocals), Bruce Fowler (trombone), Wolter Wierbos (trombone), Daniel Glass (drums).

Although from the beginning the IJG has been interested in both challenging the formal traditions of jazz and using humor as an aesthetic device, it was only with the release of 2006's Industrial Jazz a Go Go! that Durkin began using the term "avant garde party music" to describe the group's music. On the IJG website, this genre is defined as "an idiosyncratic, charming / disarming blend of jazz, rock, cartoon soundtracks, humor, blues, funk, costumes, doo wop, dada, and a lot of other stuff."