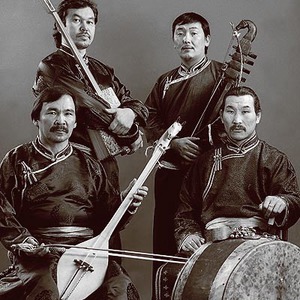 Huun-Huur-Tu is a throat singing group from the semi-autonomous Tuva Republic, Russian Federation, which is situated north of Chinese Turkestan, to the west of the Mongolian border. The Tuvan throat singing technique creates multiple notes at the same time. This is done by manipulating the harmonics to amplify different overtones within their mouth, throat, and belly when they are singing, and is referred to as khoomei in its native tuva.

In 1992 Kaigal-ool Khovalyg, Alexander Bapa, his brother Sayan Bapa, and Albert Kuvezin founded the quartet Kungurtuk, as a means of concentrating on the presentation of traditional songs of their homeland. The musicians later decided to rename the ensemble Huun-Huur-Tu. After the first album 60 Horses in my Herd (1993), Kuvezin left the band to form the more rock-oriented Yat-Kha. Kuvezin was replaced by Anatoli Kuular , who had previously worked with Khovalyg and Kongar-ool Ondar as part of the Tuva Ensemble. In 1995, Alexander Bapa, who had produced the first two albums, departed the band to pursue production as a full-time career. He was replaced by Alexei Saryglar. In 2003 Kuular quit the band and was replaced by Andrey Mongush.

The name Huun-Huur-Tu (sometimes spelled without hyphens) translates literally to "Sun Propeller," a Tuvan term referring to the special kind of light you can see streaming down through the clouds at dawn or down through densely leaved trees at noon.

Children Of The Otter (With Opus Posth & Perm Choir Mlada)