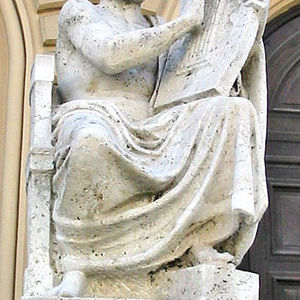 1) Homer (Ancient Greek: ??????, H?m?ros) is a legendary ancient Greek epic poet, traditionally said to be the author of the epic poems the Iliad and the Odyssey. The ancient Greeks generally believed that Homer was an historical individual, but modern scholars are skeptical: no reliable biographical information has been handed down from classical antiquity,[1] and the poems themselves manifestly represent the culmination of many centuries of oral story-telling and a well-developed "formulaic" system of poetic composition.

According to Martin West, "Homer" is "not the name of a historical poet, but a fictitious or constructed name."[2]

The date of Homer's existence was controversial in antiquity and is no less so today. Herodotus said that Homer lived 400 years before his own time, which would place him at around 850 BC;[3] but other ancient sources gave dates much closer to the supposed time of the Trojan War.[4] The date of the Trojan War was given as 1194?1184 BC by Eratosthenes, who strove to establish a scientific chronology of events and this date is gaining support because of recent archaeological research.[citation needed]

For modern scholarship, "the date of Homer" refers to the date of the poems' conception as much as to the lifetime of an individual. The scholarly consensus is that "the Iliad and the Odyssey date from the extreme end of the 9th century BC or from the 8th, the Iliad being anterior to the Odyssey, perhaps by some decades",[5] i.e., somewhat earlier than Hesiod,[6] and that the Iliad is the oldest work of western literature. Over the past few decades, some scholars have argued for a 7th-century date. Those who believe that the Homeric poems developed gradually over a long period of time, however, generally give a later date for the poems: according to Gregory Nagy, they became fixed texts in only the 6th century.[7]

Alfred Heubeck states that the formative influence of the works of Homer in shaping and influencing the whole development of Greek culture was recognized by many Greeks themselves, who considered him to be their instructor.[8]

2) Homer is a punk rock band from Drammen, Norway.

3) Homer is a band from Belgium with lyrics about politics and the environment. Their latest album is called "Swan Songs For Broken Voices"

4) A Texas '70 rock band. They recorded in Houston although they originated from San Antonio. Musically they ranged from psychedelia to more progressive rock. Their first 45 was a strange rework of Willie Nelson's I Never Cared For You on the 'A' side. The third, particularly Sunrise, marked the pinnacle of their achievements in the arena of psychedelic rock. Their album is more progressive than psychedelic but it features some fine guitar work and is recommended. Christopher Cross, who achieved considerable success as a solo artist in the early eighties, had some involvement with their LP and rumour has it that Van Wilkes played on their 45s.