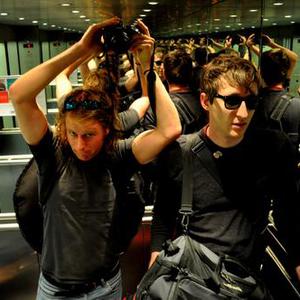 Ahleuchatistas (AH LOO CHA TEES TAS) is guitarist Shane Perlowin and drummer Ryan Oslance on a musical odyssey of pure imagination, limitless in influences, combining tight-knit composition with improvisation, and delivering powerful live shows. The project was founded in 2002 and has evolved organically in its near-decade long history. The name comes from two words: Ah-leu-cha & Zapatistas.

The project was founded in 2002 and has evolved organically in its near-decade long history.

The name comes from two words: Ah-leu-cha & Zapatistas.
The first is the title of a Charlie Parker song, the second that of a revolutionary movement which began in Chiapas, Mexico in 1994.

The earlier works of the band reflect the progressive rock roots of the original lineup of Shane Perlowin on guitar, Derek Poteat on bass, and Sean Dail on drums. On these recordings, older listeners might note a passing resemblance to Captain Beefheart's work in the late '60s and early '70s--especially Troutmask Replica.

?Music doesn't get much closer to the edge than this.? ? Alternative Press

??remarkably tight, with the ability to turn complicated and seemingly unrelated phrases on a dime.? ? NPR

??There's noise and fire in their playing, but most of these tunes are also studded with signposts, demanding close attention and clear execution. ?? ? NY Times

"Not superfluous or simply framed on a crash-and-burn musical ethic, Ahleuchatistas translates into a mindset that circumvents stereotypes or anything that links to a product-driven formula. Loud, rebellious, and riotously invigorating, the band tears down convention to impart a unique identity and sprawling musical plane, unbound by traditional applications or instilled with acquiescence." - All About Jazz

Of The Body Prone

Even In The Midst...

The Same And The Other

On the Culture Industry